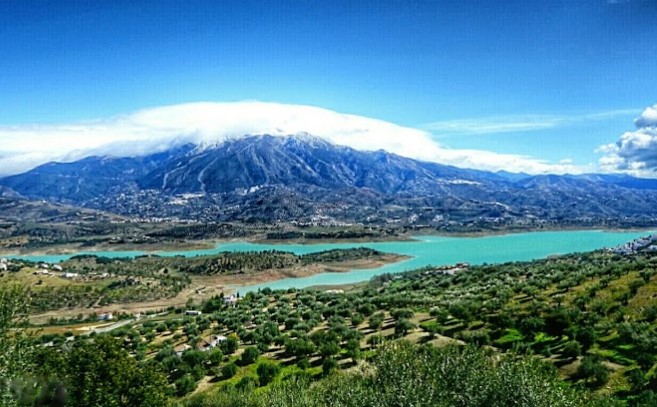 THE La Viñuela reservoir in Axarquia is reported to be suffering an exceptional drought holding only 21.82 per cent of its capacity

The La Viñuela reservoir in the Axarquia region of the Costa del Sol is reported to be in a state of exceptional drought. It currently holds 36 cubic hectometres, which corresponds to 21.82 per cent of its full capacity.

On the same date last year, the water system contained 49 cubic hectometres, meaning this year it is storing 7.88 per cent less water than in 2020. The average for this week over the last ten years has been 88 cubic hectometres, equivalent to 55.52 per cent of its capacity when full. This places the current level at 33.7 per cent below average.
“Currently the La Viñuela reservoir is in a severe drought, having exceeded the threshold of 41.5 cubic hectometres set in the Special Action Plan, in situations of alert and eventual drought”, says a hydrological report from the Commission for Drought Management of the Andalusian Mediterranean Basin River Basin.

It continues, “The situation is critical. We are consuming resources that were already low in summer. Water resources are necessary for human consumption, and also for agriculture, because this area is an economic engine, and generator of employment. Therefore, given the situation, it is essential to optimize irrigation”.

The report was written by a Professor of Physical Geography at the University of Malaga, Jose Damian Sinoga, who says he is convinced that “water is the main resource that structures development”.

The projects mentioned in the report

Issued in September, the report mentions the commissioning of the wells of the Chillar river in Nerja. Electrical work that would allow said wells to supply between three and four cubic hectometres of water through the supply pipe of the exploitation system, for human consumption, is scheduled to be finished by the end of this year.
Also highlighted in the document is the well of Molino de las Monjas, which has been used for a long time by the Municipality of Velez-Malaga to supply the population.

Actions for the structural and functional improvement of the transfer tunnels of the Viñuela diversion dams “in order to optimize their operation”, are also included in the report. Conditioning works for the reservoir vessels of the diversion dams and tunnels is reportedly 80 per cent complete. Declared an emergency, the budget for this action is €836,332.

Regarding the execution of work required for the use and distribution of the reclaimed water from the Rincon de la Victoria, Velez-Malaga, Algarrobo, and Torrox treatment plants, the report says this will begin in October, again declared an emergency, with completion expected in spring 2022.

The General Directorate of Water Infrastructures has a budget of €1.7 million available for this action. The treatment plants will be able to provide approximately 8 cubic hectometres of water for irrigation, as reported by malagahoy.es.