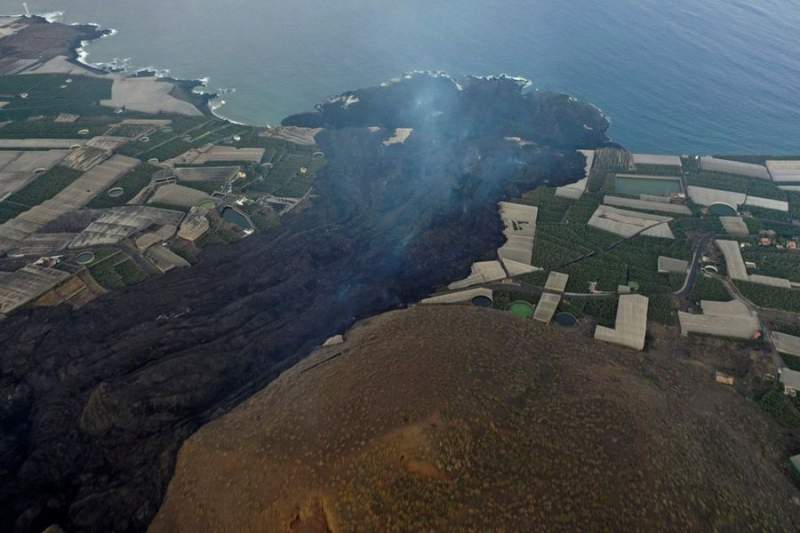 Molten rock from the new volcano on La Palma carries on expanding into the sea.

Molten rock from the September 19 eruption on La Palma reached the Atlantic Ocean last week and has been steadily increasing across the surface of the island.

The lava flow is changing the map of La Palma and has already grown 450 meters from the coast, expanding between 600 and 800 meters in length. The new delta now covers a surface area measuring 20 hectares. It is estimated that it has also reached a depth in the sea of 24 metres, the once-popular beach- loved by many- is now covered in thick black solidified magma.

“It was a wild beach,” explains Sonja, a 47-year-old resident of La Palma who is originally from Germany, speaking about Los Guirres. On Saturday (October 2) she was one of the people waiting in line to be let past by the Guardia Civil to enter her home in Las Manchas neighbourhood – located between the municipalities of El Paso and Los Llanos de Aridane.

“I could even go [to the beach] with my dog from time to time. It had maintained a wild touch, even despite the fact that they had done too much work on it,” she said.

Although seismicity is increasing in terms of the number of episodes and magnitude, earthquakes remain at average depths of ten or more kilometres, which does not suggest new eruptive centres.

Along the way, using data supplied from Pevolca, authorities have found 726 destroyed buildings, of which 605 are for residential use, 58 for agricultural use, 30 for industrial use, 18 for leisure and hospitality and seven for public use.

The seasonal trade winds are maintaining good air quality on the island, although the weather forecast for today, Wednesday, October 6, indicates that the gases and ash from the volcano may turn direction to the northeast again, which could again affect the operation of the airport during the afternoon and possibly cancellation of all flights.

Another concern is the risk to crops in the area that has the highest agricultural production on the island. The Government of the Canary Islands has sent two desalination plants that are expected to begin supplying water to banana farms on the coast of the Aridane Valley by the end of next week.

These two desalination plants are added to the water supplied by the tankers that travels from the Peninsula to the island and the desalination plant of a hotel in Puerto Naos. The objective is just to keep the plants alive, and less importantly, to save production.

The President of the Canary Islands, Ángel Víctor Torres, has valued the importance of the new extraordinary aid approved by the Council of Ministers, including a specific employment plan for La Palma, with 63 million euros or aid of 30,000 euros for those who have lost their homes.

The Minister of the Presidency, Relations with the Courts and Democratic Memory, Félix Bolaños, explained at the end of the Council of Ministers that these 213,763,000 euros, approved by decree-law, include measures in which 17 ministries participated.

Bolaños said the aid responds to the three commitments made by the president, Pedro Sánchez in his recent visits to the island: absolute priority for reconstruction, agility in the aid and constancy and coordination of public administrations.