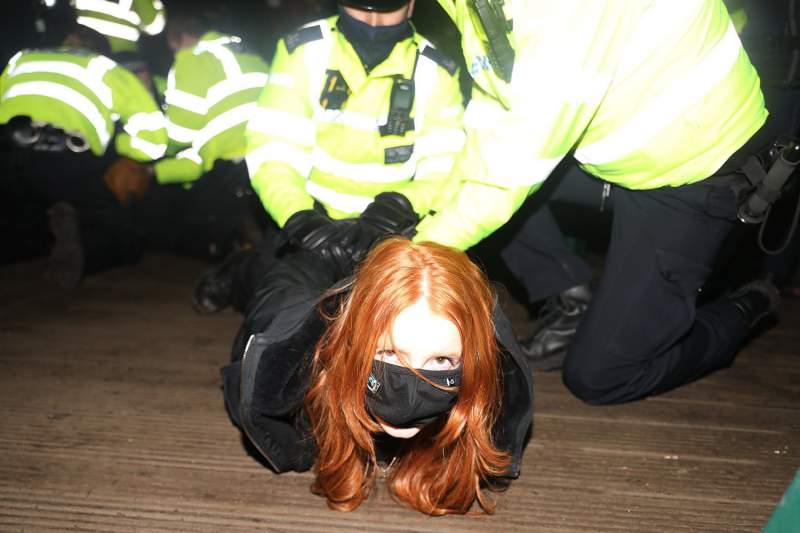 A woman who was arrested and photographed at the vigil for Sarah Everard has said she has been contacted by police officers on Tinder.

A woman who was arrested and photographed at the vigil for Sarah Everard has said she has been contacted by police officers on Tinder, leaving her “terrified.”

Patsy Stevenson, 28, said police officers contacted her on Tinder after being handcuffed at the vigil on March 13 2021.

She said they knew she was “fearful of police” and that they had done it “for a reason.”

The Met Police said its officers “must abide by our high standards of professional behaviour, both on and off duty.”

Ms Stevenson said the vigil was “a turning point”, where “everyone realised we actually we all go through the same things”, but the “sombre atmosphere… turned very scary very quickly” when officers started trying to disperse the crowd and arrested attendees.

She was held down and handcuffed by two police officers, and was also handed a £200 fine.

Ms Stevenson has since taken legal actions against the Met over the arrest.

She said that since the arrest, “about 50” officers and security guards had contacted her on the dating app.

“They were all in uniform on their profiles or it said ‘I’m a police officer’,” she said.

“I do not understand why someone would do that.”

“It is almost like an intimidation thing, saying ‘look we can see you’, and that, to me, is terrifying.”

“They know what I went through and they know that I’m fearful of police and they’ve done that for a reason.”

She has also said that she has been linked to internet conspiracies since her arrest and “can’t count the amount of death threats I’ve had.”

People have apparently said she was a “crisis actor” who was paid to attend the event and get arrested.

She added that she has also had numerous threats from people saying they would kidnap her.

“Now there’s always that fear when I’m out and I see someone staring at me,” she said.

“I just want to be able to live the way you live without fear.”

She has said she had reported the threats but has not reported the contact she has had from officers on the dating app, adding that she is not “anti-police.”

Ms Stevenson added that the police need to begin “taking accountability” for officers’ actions and to “stop telling women how to change their behaviour just to stay alive,” she said.

“If they started looking into it properly and… listening to people’s concerns and then enacting change, we would be able to trust them more.”

The Met said Ms Stevenson should “please contact us and provide us with more information so we can work to establish if any MPS officer is involved [and] whether any misconduct may have occurred.”