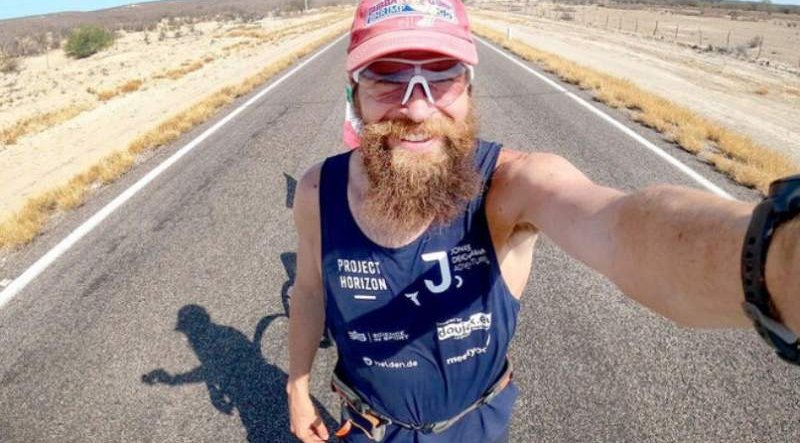 Jonas Deichmann resembles a German version of the character ‘Forrest Gump’, that Tom Hanks played in the Oscar-winning film of the same name in 1994. Even dressing similar to Forrest in the film, Deichmann has made it his latest ambition to run, swim, or cycle his way around the world.

In reality, Jonas is an incredibly tough extreme athlete, and a multiple world record holder, who has already completed some unbelievable feats during his incredible career.

In his latest challenge, Jonas will be covering the equivalent of 120–Ironmans, and travel roughly 40,000 kilometres, from Munich, back to Munich. “I am slowly lacking challenges on the bike, and I always dreamed of circumnavigating the world without an airplane”, said Jonas previously.

As always, the adventurer will again undertake his challenge without a support vehicle. During the swimming leg, he will drag along a specially made raft, and then swim to the shoreline at night to camp.

On the bike, and while running, he will also carry all his own equipment, and camp along the route. “Besides the enormous distance, logistics will be a major challenge. There are currents at sea and only a small time window for crossing the Himalayas and oceans. I also still need to find a sailing boat across the oceans as I will be hitchhiking”.

On his website, he says “With this fundraiser, I want to provide 70 children from rural areas of Africa with a bike – and a little bit of freedom”.

‘Forrest Gump’ will be heading to Portugal and Spain

Taking each day 50 kilometres at a time, Deichmann is determined to reach Munich unassisted. His journey began in the midst of the pandemic, with many restrictions, and now he is thankful to have left most of that nightmare behind him as he continues on his route.

Jonas is a well–known motivational speaker, and wants to address environmental issues with his project, while collecting funds for a rainforest protection charity. He commented about the Mexican experience, “When I left Tijuana, nobody knew me, I ran alone, and later more and more came. Sometimes I had many runners by my side, and greetings in the cities”, exactly like Forrest Gump had, as reported by malaghoy.es.