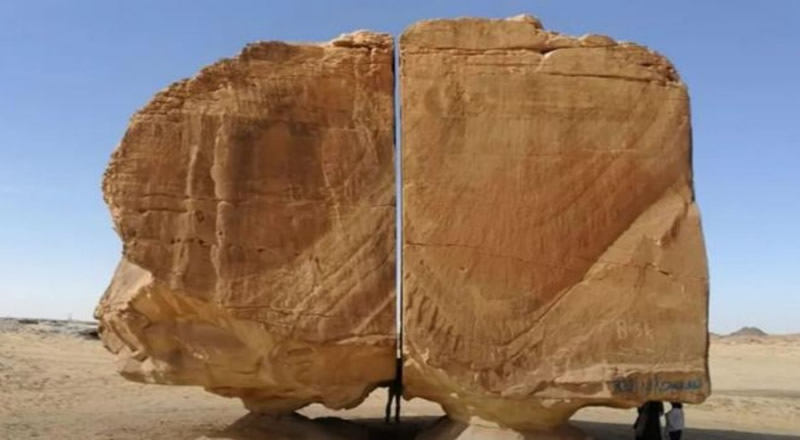 Giant rock cut in half by alien lasers in the Saudi Arabian desert. image: youtube

Was a giant rock in the Saudi Arabian desert cut in half by alien lasers?

The Al Naslaa rock formation is a giant rock located in the Tayma oasis in northwestern Saudi Arabia. It is a sandstone rock that measures approximately 9 metres (30ft) in height, and is 7.5 metres (25ft) wide. Charles Hoover laid claim to discovering this phenomenon in 1883.

Mystery has long surrounded this giant rock, due the fact that it appears to have been cut exactly in half. There have been countless theories as to how the rock was cut so precisely in a completely straight line. Among others, some have suggested it must have been cut in half by visiting aliens, or by a supernatural being.

Conspiracy theorists have even said that the rock is proof of the existence of a higher technology, believing that ancient civilisations may have been more advanced than is currently thought.

Covered in rock paintings, it depicts what is believed to be a man on horseback. However, that is not the reason why Al Naslaa receives so much media attention. The formation is famous because it appears to have been perfectly cut with a laser beam, and both pieces are erected on precariously balanced rocky pedestals. It is so unusual that it has become a massive tourist attraction.

Split with such perfect precision, it seems too extreme to be caused by natural causes, but scientists now believe the cut is entirely natural. The mystery might just have been solved, offering a more scientific explanation, according to The Sun.

Cherry Lewis, a renowned geologist explained to MailOnline, “The split could have formed due to a process called freeze-thaw erosion, which occurs when water enters a small crack in the rock. As temperatures drop, the water freezes and expands, causing the crack to widen and lengthen. As the ice melts, the water moves further and further into the crack. This process can be repeated. until a rock breaks in half”.

“This process, together with wind erosion, which in a desert environment is like sandblasting, could also explain why the rock remains alone in this way”, concluded the expert, as reported by 20minutos.es.