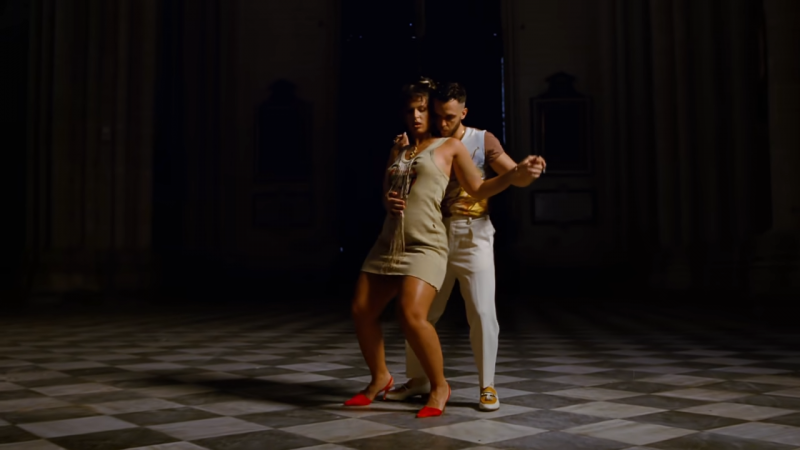 The latest music video by Spanish rapper C. Tangana caused a stir this week. Not just through its title ‘Ateo’ (atheist) or because of its steamy dance moves. But due to its unusual filming location inside Toledo Cathedral. The raunchy cathedral video drew an apology from key church figures.

The clip, also featuring Argentinian artist Nathy Peluso, features the two grinding within the hallowed halls of one of Spain’s most famous Roman Catholic landmarks. A crowd of people, including one dressed as a priest, look on. There are also scenes mirroring the paintings inside the cathedral. And one instance of Peluso naked but partially pixelated. The Dean of the cathedral, Juan Miguel Ferrer Grenesche, issued a statement apologising for the ‘hurt sensitivities’ the scenes may have caused, but ultimately defended the filming.

The Dean pointed to the part of the song “I was an atheist, but now I believe, because a miracle like you had to come down from Heaven” as showing a positive light on the spectacle. He called it “a story of conversion through human love.” He continued, “It is true that the video uses provocative visual language, but it does not affect faith.” He also mentioned the church has tried to promote dialogue with contemporary culture. This was not enough to sway the majority of the church members, or the archbishop himself.

A few hours later, a second statement was released, this time deeply regretting the raunchy cathedral video. The Archbishop, Francisco Cerro Chaves, said he was “absolutely unaware of the existence of the project, its content and the final result.” He apologised “humbly and sincerely to all the lay faithful, consecrated people and priests who have felt justly hurt by this misuse of a sacred space.” He assured that a review of procedures is ongoing to ensure that nothing similar can occur again and they will start to “immediately develop a protocol for the recording of images for public dissemination in any temple of the city.”

This raunchy cathedral video outcry follows on from last month’s controversy when the singer Zahara also caused a stir in Toledo. She advertised her concert by posing as the Virgin Mary on posters around the city. Political party Vox made a point of removing them and denounced the singer. That did not deter C. Tangana or put the church on alert for any other stylised use of its imagery.