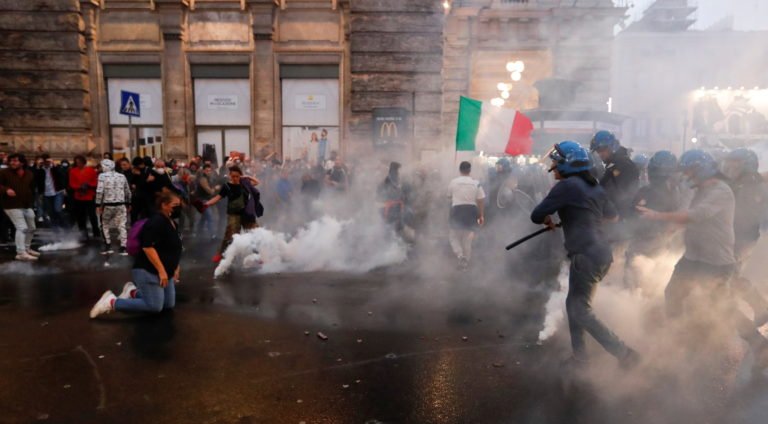 Demonstrators clash with police officers during a protest against the government's introduction of the "Green Pass" near Chigi Palace in Rome, Italy. image: Twitter

Italian police used water cannon and tear gas on Saturday, October 9, to push back hundreds of people, including neo-fascist activists, that were demonstrating in Rome against a government drive to make the COVID-19 “Green Pass” mandatory for all workers.

One group of protesters tried to break through police lines to reach Prime Minister Mario Draghi’s city centre office in the capital, at the same time, another group tried to smash their way into the headquarters of Italy’s main CGIL trade union.

The protests come days before Italy becomes the first country in Europe to make all workers carry the Green Pass in an effort to accelerate vaccinations and stamp out coronavirus infections. The pass, a digital or paper certificate showing someone has received at least one vaccine dose, has tested negative or recently recovered from the virus, was originally conceived as a way of easing travel among European Union states.

Draghi denounced Saturday’s violence and said his broad unity government remained committed to completing its vaccination campaign, according to a report from Reuters.

“The right to demonstrate to support one’s ideas can never degenerate into acts of aggression and intimidation,” he said in a statement issued by his office.

Opponents of the Green Pass say it tramples on freedoms and is a back-door means of forcing people to vaccinate. Their cause has been backed by far-right neo-fascist groups who local politicians accused of orchestrating Saturday’s violence.

Local media reported that around 10,000 people took to the streets of the Italian capital, with many chanting “freedom, freedom” as some looked to break past police in riot gear deployed to guard access to Draghi’s office.

CGIL, which has accepted the Green Pass system for workers, condemned the attack on its offices.

“The assault on CGIL’s national headquarters is an act of fascist thuggery, an attack on democracy and on the world of work. No-one should think that they can return our country to its fascist past,” said its leader Maurizio Landini in a statement.

Under the pass system, any worker who fails to present a valid health certificate from Oct. 15 will be suspended with no pay, but they cannot be sacked.

Some 80% of all Italians over the age of 12 are now fully vaccinated and the vast majority of people seem to back the inoculation drive and the use of the Green Pass.