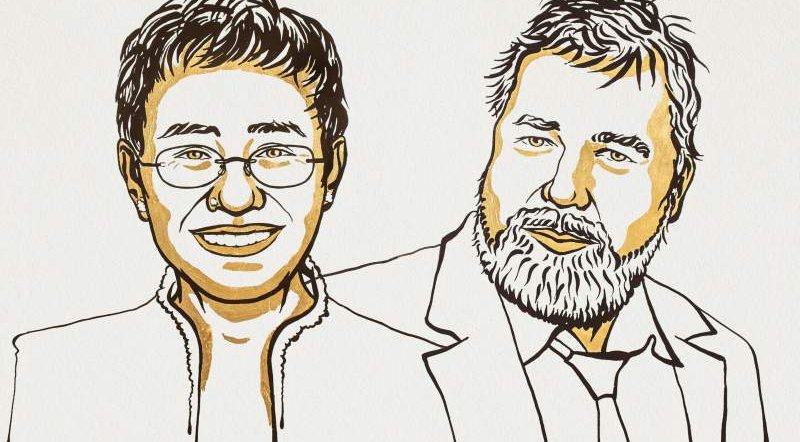 The Nobel Peace Prize 2021 recognises the efforts of journalists fighting for freedom of expression.

A pair of journalists from two different parts of the globe have won the much lauded Nobel Peace Prize 2021. The honour, awarded by a Norwegian committee, was given for their work for “their courageous fight for freedom of expression and their efforts defending freedom of opinion, an indispensable condition for democracy and peace.” Maria Ressa, from the Philippines, and Dmitry Muratov, from Russia, have been tirelessly writing and campaigning to ensure that journalists have the right to cover critical issues.

Muratov is the director of an opposition newspaper in Russia, the ‘Novaya Gazeta.’ The biweekly publication has been running since 1993. It publishes articles on a wide range of topics that range from corruption, police violence and illegal arrests, and the usage of Russian troops outside the country boundaries. In its thirty years in print, six of its journalists have been assassinated. Muratov has dedicated his award to “the media and colleagues who died for freedom of expression: Anna Politkovskaya, Yuri Shekochijin, Anastasia Baburova, and others.”

Muratov is not the first Russian to receive the prize. Andrei Sakharov, an academic whose work focused on nuclear disarmament and human rights, and the former Soviet president Mikhail Gorbachev have both been honoured with the award.

Maria Ressa is the founder of the extremely popular online news portal, Rappler. She uses this platform to “denounce the abuses of power, the use of violence, and the growing authoritarianism in her native Philippines.” She is the first person from the country to be awarded this prize. The Filipino president, Rodrigo Duterte has been waging a corrupt war on drugs that has seen over 6000 people die since 2016. Ressa is currently awaiting the result of an appeal against charges of cyber-libel, believed to be brought on by the government, through a businessman named Wifredo King. These are just some of the charges brought against her and her news portal, as the government tries to silence them and remove their licence.

Ressa fights all these charges with a team of lawyers, including Amal Rooney, wife of actor George. Another war she is waging is against the waves of false information on the internet. These crusades have led to her being named on the Time magazine people of the year list 2018, and the Reporters Without Borders Commision for Democracy.

Some of the other Nobel Peace Prize 2021 nominations this year included Chancellor Angela Merkel, and climate change activist, Greta Thunberg, this being the latter’s third nomination in a row.