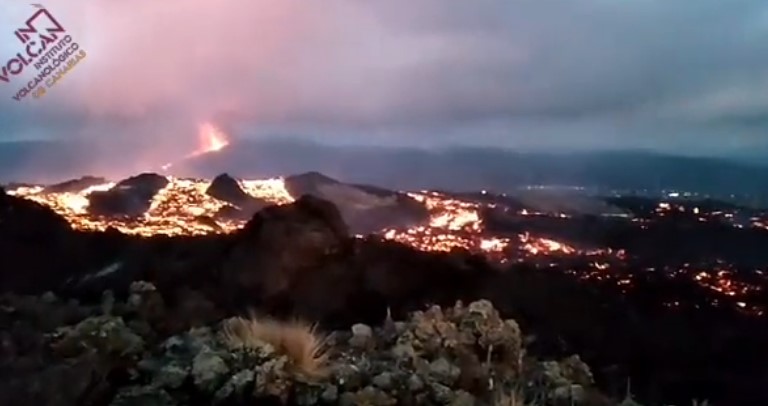 The Cumbre Vieja volcano on the Canary Island of La Palma entered its fourth week of activity on Sunday, October 10. This wonder of nature is still is not showing any signs of cooling off just yet, after erupting 21 days ago.

Devastation has ensued, with streams of lava travelling out of different directions. By Sunday midday, what little of the municipality of Todoque that had escaped the initial flow, sadly found itself engulfed and destroyed by a new stream estimated to be around 1240°C.

Powerful explosions from the volcano had rocked the island on Saturday evening, with the lava streams flowing at an accelerated speed. By Sunday 10, the flow seemed to have stabilised, and slowed down.

A stream which on Saturday was around 150 metres from the ocean, was less than 50 metres away on Sunday. This has formed a new strip at the edge of the ocean, already covering approximately 40 hectares.

Thanks to a change in wind direction, the air quality has improved somewhat, as the ash cloud that is spewing out of the volcano was moved by the wind.

Scientists on La Palma are of the opinion that the Cumbre Vieja will erupt for a longer period than the 33 days of Teneguia in 1971. Their only worry right now is that a new mouth could open up that would subsequently send a new stream of lava on a course of destruction, and cause more evictions among residents.

As long as the lava continues to come out from the original mouth at a good rate they say, then the magma is unlikely to look for a new outlet.

Margarita Robles, the Spanish Minister of Defence paid a visit to the island on Sunday 10. The minister assured that the Military Emergency Unit (UME) will remain on La Palma for as long as they are required, as reported by 20minutos.