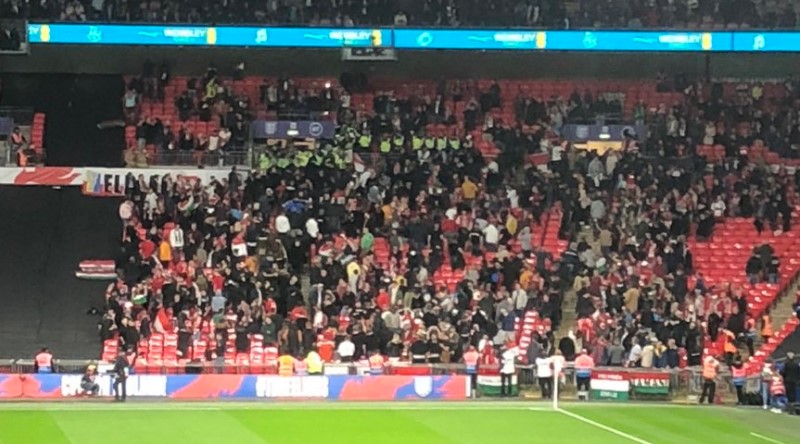 Only three minutes after kick-off of England’s World Cup qualifier against Hungary at Wembley this evening, Tuesday, October 12, trouble broke out among the Hungarian fans. Segregated into one section of the Wembley enclosure, the Hungarians headed straight for the small group of around 20 stewards.

The stewards found themselves under attack from all sides, until police reinforcements arrived. Violence ensued as the police did their best to bring things under control, wading into the fans with batons drawn.

It was a lost cause as both stewards and police were forced to retreat, ending up being kicked and punched as they fell back through the tunnel underneath the stands. The match continued on the pitch just yards away while this incredible scene was taking place.

Eventually, the violence calmed and riot police were able to restore some semblance of order among the visiting fans. There have been no reports of serious injuries as yet. In an effort to stem more incidents, riot police have stationed themselves in the area in front of the away fans.

Around 1,000 visiting fans had been expected for this match, with most of them already living on UK soil. Hungarian fans booed the England players loudly as they took the knee before the match, while the Hungarian team stayed on their feet. The away fans even unfurled a banner showing their opposition to kneeling.

As a result of their fan’s previous discriminatory behaviour, the Hungarian FA has already been penalised by Uefa, having to play three home matches behind closed doors. Because this game comes under the jurisdiction of Fifa, Hungarian fans were not banned from attending the game, as reported by thesun.co.uk.

Hungary fans scuffling with stewards and police at Wembley pic.twitter.com/7dDei9IGWX