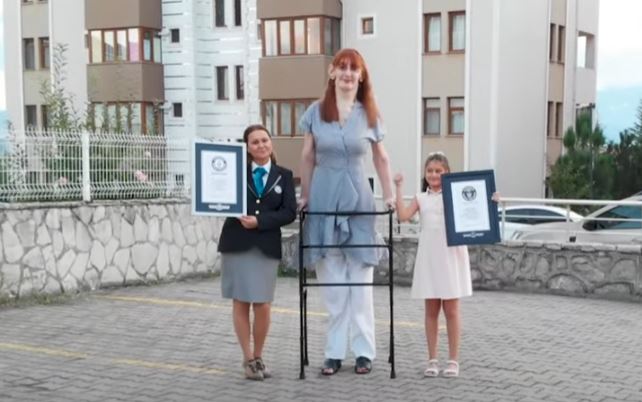 New world record for tallest woman alive. The record has been set by Rumeysa Gelgi from Turkey.

Gelgi has a rare condition called Weaver syndrome. She has measured in at a staggering 7ft 0.7in (215.16cm) and set a new world record. Gelgi is only 24 years old. For the most part, she uses a wheelchair. She can walk with the help of a walking frame though.

Since gaining her first world record she has supported others with rare conditions.

Gelgi said: “Every disadvantage can be turned into an advantage for yourself so accept yourself for who you are, be aware of your potential and do your best.”

She has been welcomed back by Guinness World Records. Editor-in-chief Craig Glenday commented: “Her indomitable spirit and pride at standing out from the crowd is an inspiration,”

“The category of tallest living woman is not one that changes hands very often, so I’m excited to share this news with the world.”

Gelgi focuses on the positives associated with her condition. She said: “I like being different from everyone else,

“It also provides me with easy access to high places, and looking down at people from above isn’t a bad thing either.”

According to Medlineplus: “Weaver syndrome is a condition that involves tall stature with or without a large head size, a variable degree of intellectual disability (usually mild), and characteristic facial features. These features can include a broad forehead; widely spaced eyes (hypertelorism); large, low-set ears; a dimpled chin, and a small lower jaw (micrognathia).

“People with Weaver syndrome can also have joint deformities called contractures that restrict the movement of affected joints. The contractures may particularly affect the fingers and toes, resulting in permanently bent digits (camptodactyly).”