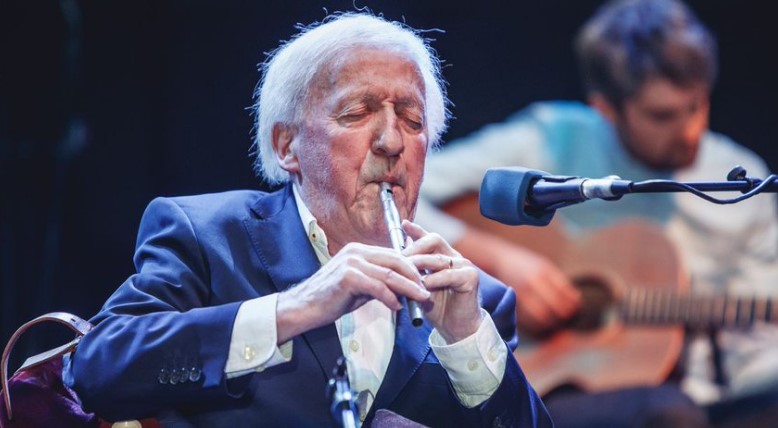 Paddy Moloney, the Irish musician, leader and founder of the legendary folk group The Chieftains, has died today, Tuesday, October 12, in the Irish capital of Dublin. His passing, at the age of 83, was confirmed by his family. Paddy was married with six children.

He was the winner of six Grammys with the group. The Chieftains are masters of many traditional instruments, including the Gaelic bagpipes, or the Irish flute. Paddy was also a master of the accordion, as well as being a great percussionist, playing the bodhrán.

The Chieftains are responsible for the soundtracks of several top films, counting “Braveheart“, “Gangs of New York“, and “Barry Lyndon”, among them. Along with The Dubliners, and The Pogues, they are without a doubt the most famous Irish folk groups in the world.

Born in the north of Dublin, into a family of musicians, Paddy began to form his first groups at a very young age, with the marked intention of undertaking an evolution of traditional Irish folk. In 1962, The Chieftains were born, with its original lineup of Sean Potts on the Irish flute, Michael Tubridy also on the Irish flute, and Sean Keane on violin.

By 1979, the group consolidated its main structure of Sean Keane, Kevin Conneff on vocals and playing the bodhrán Irish drum, and Matt Molloy on flutes.

Paddy and his band collaborated with many top artists on dozens of albums. Names as diverse as Elvis Costello, Mark Knopfler, Willie Nelson, Sting, and Madonna are some of them. They also worked with top Spanish artists Kepa Junquera and Carlos Nuñez.

Even huge bands like the Rolling Stones collaborated on albums with Paddy and the boys, helping them out on 1995’s ‘Long Black Veil’ album by playing ‘Jumpin’ Jack Flash’, and ‘The Rocky Road To Dublin’,

Moloney was awarded the Commendation of the Order of Civil Merit in 2018 by the Spanish embassy in Ireland. This was granted by King Felipe VI himself, at the request of the Spanish Government. According to a statement from the embassy, it was given in recognition of his “invaluable work carried out around the world to promote Celtic and traditional music”, as reported by laopiniondemalaga.es.