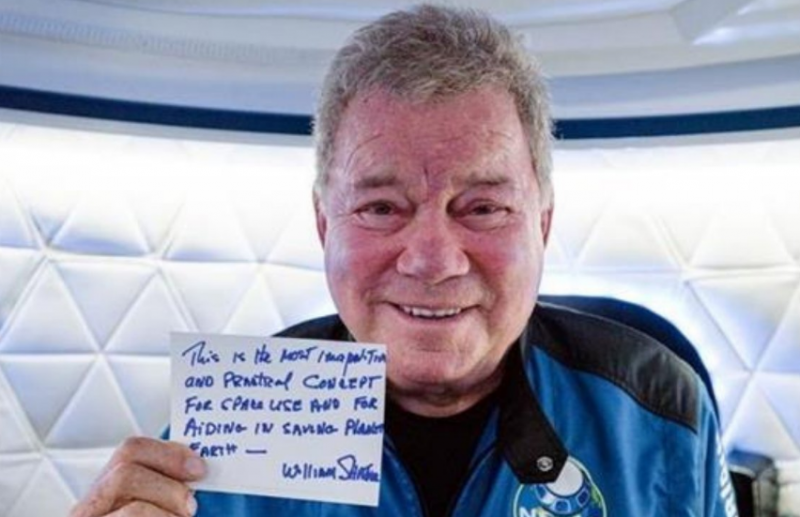 William Shatner was in tears as he touched down on Earth after his monumental flight into space onboard Blue Origin’s New Shepard rocket.

Shatner said of the trip: “The little things, weightlessness, but to see the blue colour whip by. And now you’re staring at the blackness. That’s the thing, the covering of blue…this comforter of blue we have around us.”

“Then the sudden you shoot through it all, you whip off the sheet and you’re looking at the black ugliness.”

“There is Mother Earth, comfort, and there is, is that death? I don’t know? Is that the way death is?”

He went on: “This experience is something unbelievable.”

“My stomach went up, this is so weird. But not as weird, as the covering of blue.”

Shatner called it the “most profound experience I can imagine.”

Crying, he said: “I’m so filled with emotion, it’s extraordinary.”

“I hope I never recover from this.”

“Maintain what I feel now, I never want to lose it. It’s so much larger than me and life.”

Set to take off at 3pm BST (around 9am local time), Shatner eventually took off around 3.50pm BST, seeing him become the oldest person to go into space.

Shatner was seen ringing the bell before being strapped into the rocket, which took off from the Texas desert.

They reached zero-G and space at 351,000 feet altitude, experiencing several minutes of weightlessness and a spectacular view of Earth.

Mark Bezos, Jeff Bezos’ brother, who flew on the first human flight of New Shepard, told the crew as they were about to take off: “You lucky bastards.”

“It was only 10 weeks ago that I was sitting where you are, watching the countdown clock full of anticipation and excitement.

“Eager to feel a rumble of liftoff and the majesty of weightlessness.”

“The depth of my desire to fly again is hard to express.”

“Godspeed, New Shepard, I can’t wait to hear your stories. Mark,” he added.

After a little over 10 minutes, New Shepard’s capsule holding the crew came back down on Earth.

The flight was due to take off yesterday, October 12, but was pushed back a day.

A statement said: “Due to forecasted winds on Tuesday 12 October, Blue Origin’s mission operations team has made the decision to delay the launch of NS-18 and is now targeting Wednesday 13 October.”