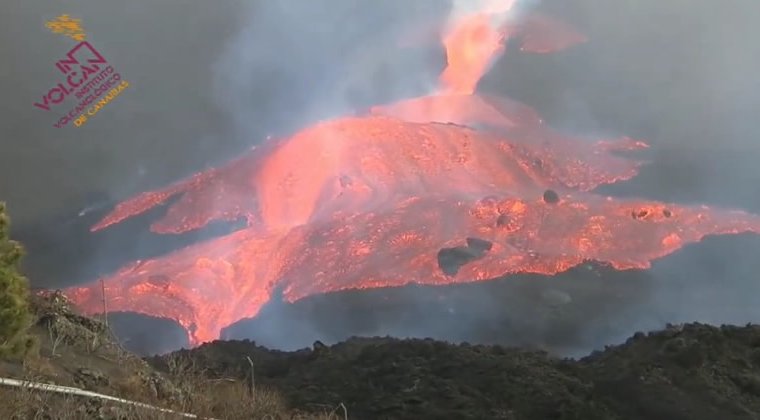 Involcan, the Volcanological Institute of the Canary Islands has reported that at around 2.15pm local time, this Thursday, October 14, the main cone of the Cumbre Vieja volcano on the island of La Palma increased its flow of lava. We will keep you updated on this latest activity.

Maria Jose Blanco, the spokesperson for the Pevolca Scientific Committee and director of the National Geographic Institute (IGN) in the Canary Islands, during today’s press conference, explained that there is no end in sight of this eruption at the moment.

With an estimated 17,774 tons of sulphur dioxide spewing out of the volcano yesterday, it continues to register high values ​​in line with an eruptive process. This brought Ms Blanco to comment that the end of the eruption will not occur “in the short or medium term”.

Several parameters are used to calculate the end of an eruption she said, such as the SO² emission rate. To signal that the eruptions were coming to an end, this level would need to drop to around 100 tons per day, or less. Plus, the seismic activities would need to stop.

Miguel Angel Morcuende, the technical director of Pevolca reported that the new stream of lave that started flowing northwest yesterday, which forced more residents in the municipality of Los Llanos to be evacuated, has slowed down. Meanwhile, the stream that is heading south is moving faster, at around 50 metres per hour, thereby accumulating maximum energy and thrust.

As he pointed out, the stream moving towards the northwest has not yet reached the evacuated area, and if it continues to slow down then it is possible it could actually stop. “The Pevolca will continue throughout this afternoon monitoring and monitoring this wash to see if it finally stops”, said Mr Morcuende.

An area of 640.27 hectares is currently affected by the lava, and the maximum width of the flow is 1,770 metres. This is 250 metres more than before due to the widening caused by the stream coming from the northwest, as reported by moncloa.com.