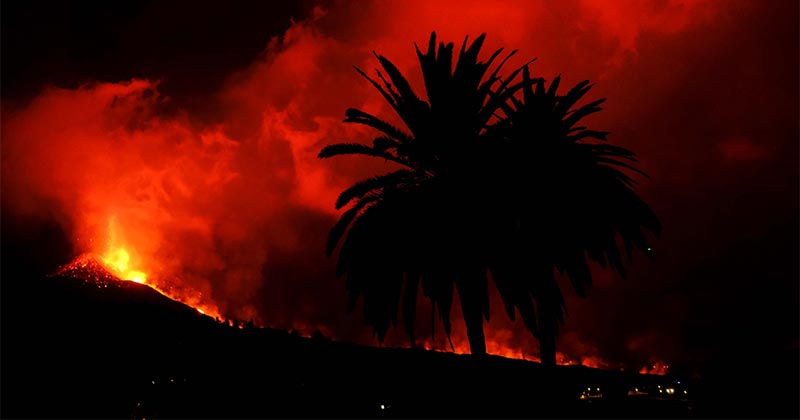 "Against the clock" rescue of four dogs in La Palma

AFTER many hours reporting close to La Palma’s volcano, leaving for a breather through the tunnel connecting west coast Los Llanos and the disaster zone, to capital Santa Cruz on the east coast is like arriving from a warzone to sudden peace. But in such record time that it’s difficult to believe it’s the same island.

Exhausted, grimy and scrambled as I am, isn’t everyone here strangely normal and unconcerned?

The air’s clean. There’s no fine ash or strange smell, no extraordinary rumbling, emergency vehicles, roadblocks or visible distress. What happened to the full-on volcano, shooting constant lava and smoke high into the air a short distance away?

A caffeine top-up after two sleepless nights tunes in the conversations around me and of course everybody’s talking about the volcano. How could they not, when all that separates these two worlds is the barrier of a 1,500m high ridge, helped by prevailing winds.

There’s massive concern and solidarity. Islanders look after their own. With 6,000 evacuated to date, fewer than 300 Palmeros used the centres provided. As I write, it’s down to 49. The others, who’ve either lost homes, or are about to as the lava flow makes its way, now very slowly, down towards the sea, are with family, friends or in locally owned holiday accommodation. Tourists evacuated from island hotels were in the majority at the centres, until moved to Tenerife hotels.

Whether or not the shelters will fill because things get worse fast is difficult to predict. So far, according to Jose Mangas, Geology Professor at Gran Canaria University: “This is a textbook Canarian eruption, but that doesn’t help with predicting how long it’ll last.”

Enormous advances in related sciences and their technology, interpretation and diffusion have been made since the Canaries’ last eruption undersea off El Hierro in 2011/12. It became apparent then that Canarian seismology and volcanology knowledge far exceeded accessibility and diffusion protocols.

The lead up to the La Palma volcano eruption has been closely monitored and publicised since seismic activity increased noticeably in 2017, then exponentially last October.

Experts nailed it this time, announcing what was essentially an eruption warning 11 days before it happened. Tremors had increased in frequency and strength and moved up to just below the surface. There was time to warn islanders and make evacuation plans with communities likely to be affected.

At first, with the low viscosity lava’s main flow going where gravity invited: down barrancos (ravines) towards the coast, all boded well, despite the drama. Canarians don’t build in barrancos.

After day one, the lava thickened, cooled and slowed down, solidifying, thickening and creating a barrier to secondary flows, which diverted to either side, spreading the danger zone. Then a new vent blew in Tacande, causing last minute evacuations and the loss of more homes.

What will happen next is unclear. It depends on uncontrollable factors and how well they’re interpreted. The relative calm with which the volcano was greeted when it erupted has evaporated, just like water in pools and irrigation tanks when lava hits, as seen in countless video clips.

Like many people, I find the volcano thrilling. It’s difficult not to be moved by such an extraordinary spectacle, impossible not to see our ant-like insignificance in the face of nature. But touting this volcano as a tourist attraction, or being thrilled by it, seems inappropriate when the plight of people losing everything moved us to tears.

It’s an understandable contradiction. One aspect doesn’t cancel out the other, but sensitivity is essential. Feeling awe for the truly awesome is understandable, as is compassion for those who’ve suffered the awful.

Pedro Sanchez’ and the King’s stated intention to ‘cover all losses’ and the massive show of support, both inside the Canaries, nationally and internationally, ease the dreadful sense of despair and helplessness.

The town hall of Los Llanos de Aridane has set up a bank account to receive donations for the victims of La Palma volcano eruption.