Madrid car chase ends with car embedded in a restaurant 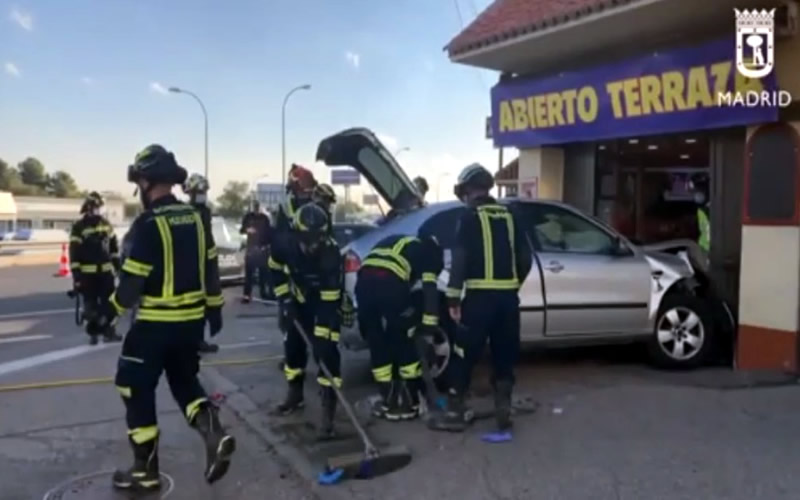 A man in his 40s was seriously injured this Monday, October 11, after the car in which he was travelling crashed into a restaurant on the A-2 service road in the Madrid district of Barajas. As sources of the investigation informed EFE, its driver had escaped only minutes earlier from a Guardia Civil control.

According to a statement, the incident occurred at around 8.45 am, when this vehicle, which contained four occupants, avoided a police checkpoint at full speed, and began a police chase with Guardia Civil officers in pursuit, along the A-2, heading out of Madrid.

Finally, after taking the service road, the driver lost control and his vehicle ended up smashing into the facade of the Aragon Restaurant, located at 368 Avenida de Aragon, in the Barajas district.

This violent impact left the car embedded in the wooden front door of the establishment. Luckily for the owner, the crash only damaged the door of the restaurant, although, as one of the employees explained to EFE, it caused a “good scare” for the workers. The owner also pointed out that, “thanks to the fact that it is a bridge” – meaning there were fewer people on the premises – a tragedy has been avoided.

Firefighters had to release one occupant who was unconscious

Madrid City Council Firefighters attended the scene and had to rescue one of the occupants from the rear of the vehicle, who was unconscious. After being released, the man, in his 40s, was treated by health workers of Samur-Civil Protection for a severe head injury. He was intubated, and subsequently transferred, with a serious prognosis, to the La Paz Hospital.

Suffering from minor injuries, the rest of the occupants were sent to local health centres in the region. The firefighters had to dislodge the vehicle from the facade of the restaurant before securing the area. As sources of the investigation informed EFE, one of the occupants has been detained by the Guardia Civil, as reported by 20minutos.es.