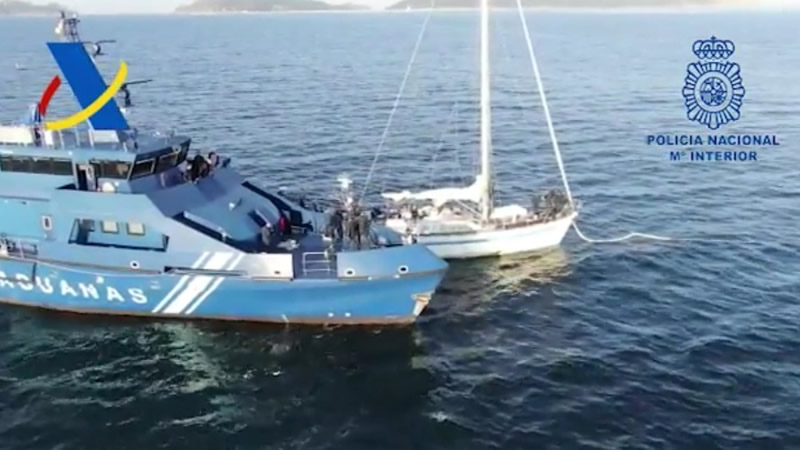 Three people have been arrested in Mijas and Fuengirola as the result of ‘Operation Midas-Ballestrinque’. A sailboat with two and a half tons of cocaine was intercepted off the Azores, en route for Vigo. It was boarded by officers from the National Police, along with an assault crew from the Customs Surveillance ship Petrel.

Both crew members of the boat were also arrested on suspicion of links with a smuggling organisation based on the Costa del Sol and Campo de Gibraltar.

According to sources close to the case, this cache was a commission from Galician drug traffickers. Intelligence work around port infrastructures had been conducted by the National Police since the end of 2019. During surveillance work they detected several individuals with a history of being connected to the maritime transport of cocaine.

Investigators discovered that the gang had acquired a German registered boat called the Goldwasser in the Canary Islands, which was scheduled to sail to the Caribbean. Requesting authorisation from Germany, the plan was put into place through the Intelligence Center against Terrorism and Organized Crime (Citco) to proceed with boarding the Goldwasser before that they could transfer the drugs to another boat.

On October 8 the raid was carried out, 480 miles north of the Azores. The two crew members showed no resistance and the boat was towed back to Vigo by the Petrel, where it docked today, Friday, October 15.

In a simultaneous raid, three members of the organisation were arrested on the Costa del Sol. A search of their homes uncovered €34,600 in cash, a pistol, mobile phones, a motorcycle, three high-end vehicles, and various documentation that is being analysed, as reported by laopiniondemalaga.es.