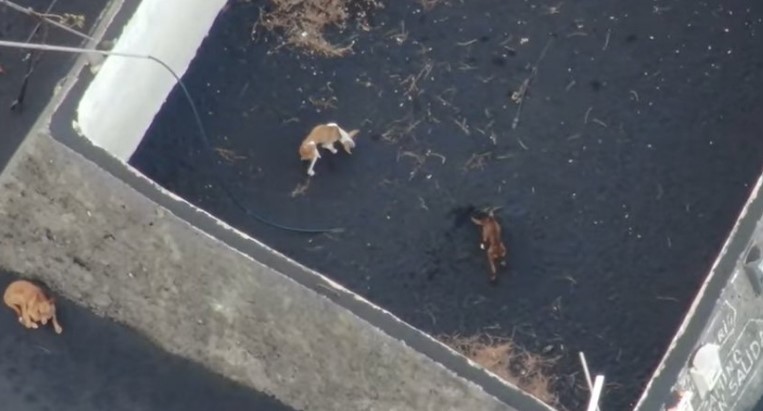 The entire municipality of Todoque has disappeared from the map on the island of La Palma, after being devoured by molten lava from Cumbre Vieja volcano. Only a few square metres of space actually remain untouched by the magma, in what are known as kipukas on the volcanic island of Hawaii.

Inside one such kipuka, several dogs have been observed still alive, but trapped, and they have captured the attention of the local Canarian, and also worldwide watching audience. It has been reported today, Saturday, October 15, that one of the hounds is believed to have died.

Drones have been flown over the location where the animals are penned in by the lava, and, according to the animal association Leales.org, it is reported that there could be a total of six dogs stuck there in that area. Four are definitely known to be trapped in the grounds of a home in the El Paraiso neighborhood of El Paso.

A company called Aerocamaras is reportedly hurriedly putting together an operation, in what is really a race “against the clock”, to use a cargo drone to rescue these stricken creatures. Another support drone would then apparently be used by the pilot in charge, to coordinate the rescue mission.

To fly a helicopter into the zone is totally unfeasible, due to the amount of ash and pyroclasts being released by the volcano. Access on foot is virtually impossible also, due to the surrounding ash and lava. Drones are clearly the only way to attempt this rescue mission.

A spokesperson for the drone company has stressed that it always acts within the air legality, respecting what is indicated by the competent authorities and “any decision they may take to avoid unnecessary risks as well as always putting everyone’s safety first”.

Volcanic Life and Ticom Soluciones SL, both based on the island, with the endorsement of the Cabildo de La Palma, have already been feeding the animals using drones for several days.

Leales.org, the animal association, points out that two of the hounds can leave and enter the pound, allowing them to shelter from the heat and cold, but the other two, in a smaller pound, are in the sun, and without the possibility of shelter. As a result, the Aanipal association has proposed the delivery of a small shelter for their protection, as reported by laprovincia.es.

Abandoned #dogs trapped on a tiny island of land cut off by lava from #LaPalma volcano are being kept alive with food parcels delivered by #DRONES pic.twitter.com/RIapbUKRHh