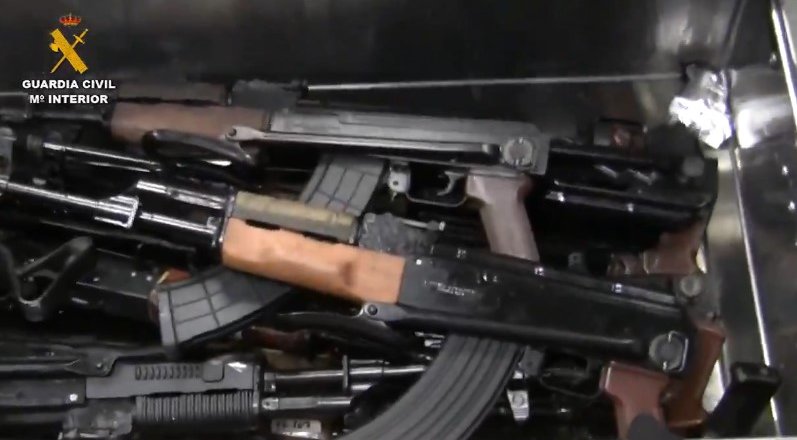 Guardia Civil officers have participated in collaboration with police forces from eight other European countries in the dismantling of a major criminal organisation dedicated to international arms trafficking. This group was made up of citizens of Slovakia, the Czech Republic, and the Netherlands.

The gang specialised in converting conventional firearms, including pistols, submachine guns, and last-generation assault rifles. These weapons had previously been recalibrated to the Flobert system (for use in sports shooting and training at close range), but after being modified, many had the ability to make automatic fire and become weapons of war.

More than 350 weapons were seized in raids, with 18 people arrested. The police suspect though that the dismantled organisation has already supplied more than 1,500 firearms to criminal groups located in Spain, the Netherlands, Austria, Denmark, Germany, Portugal, Sweden, and the Czech Republic.

When different European countries, including Spain, began reporting the seizure of these types of modified firearms, an investigation was launched in 2020. An exchange of information through Interpol between the police forces involved, revealed a common origin in different parts of Slovakia.

EUROPOL set up an Operational Task Force (OTF), due to the scope and complexity of the investigation. The participation of the Benemerita began as a result of the investigations and intelligence prepared by its Information Office (UCE3) in relation to seizures in Spain of several firearms of the aforementioned organisation.

One of these weapons was recovered from a vehicle in Madrid that had been involved in a fatal traffic accident, which was found to be fitted with false Dutch plates. The driver fled the scene but was later identified as a member of the now dismantled gang. He was located, and arrested, along with two other members of the group, just two days after the accident, when they tried to flee Spain from Malaga airport, as reported by larazon.es.