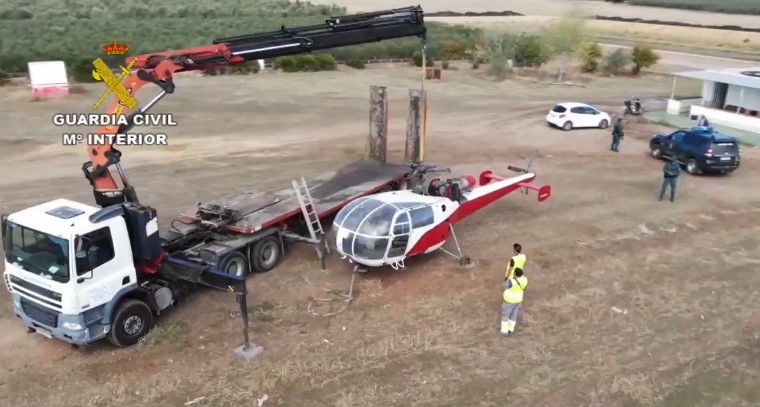 A huge police operation has netted 38 narcos, aircraft, helicopters, and 120 kilos of hashish

Guardia Civil officers have dismantled a criminal organisation that had been importing large amounts of hashish into the peninsula, both by sea ​​and by air. ‘Operation Limoneros’ concluded with the arrest of 38 people, who have been charged with the crimes of drug trafficking, illegal possession of weapons, smuggling, belonging to a criminal organisation, and falsification of public documents.

This operation was launched back in September 2019 after the Guardia Civil learned of a helicopter crash in Morocco. The Mexican pilot of this craft had been staying in Sevilla, so it aroused the suspicion of the force, leading to an investigation.

Investigators quickly verified that the group was looking for second-hand aircraft, and spare parts, for which purpose it had to have a group of flight mechanics.

A cache of 420 kilos of hashish was intercepted on a plane from Morocco in November 2019, and its two crew members detained by Guardia Civil officers in charge of the investigation.

For this operation, the network had pilots from Spain, although they also brought some from Latin America, especially from Mexico. These were usually novice pilots who were trained in Spain, for which the group had a two-seater plane.

As reported this Friday, October 15, by the Guardia Civil, during their two-year investigation, it is known that the network suffered at least two major air accidents. The first of these was the crash involving the Mexican pilot that initiated the operation.

A second accident occurred on September 9 of this year, when a pilot of Spanish nationality died on a night flight in Morocco. Including these two crashed ones, the organisation has had seven aircraft, specifically two helicopters and five light aircraft.

In order to operate, in addition to the “pilot school” and the group of mechanics, they had places to hide the aircraft, as well as clandestine tracks, some of them camouflaged as tracks to train greyhounds.

During the investigation, it was learned that the gang had a branch that introduced hashish by sea. Last June, 4 people were arrested, and 750 kilos of hashish were seized, as well as a vehicle used for loading a stash on the coast of Huelva.

Under the authorisation of the Court of First Instance and Instruction No4 of Sanlucar la Mayor, the investigators carried out 24 searches, in Murcia, Toledo, Caceres, Huelva, and Seville, where another 120 kilos of hashish were seized. They picked up the gang’s leader in a luxury home in the Huelva town of Cartaya, and the operative chief was located in Sevilla.

Four aircraft were seized, along with numerous effects related to aeronautics, including flight manuals, as well as spare parts for the aircraft. Three firearms were also uncovered, a marijuana plantation in the Sevillian town of Los Palacios and Villafranca, €78,000 in cash and abundant documentation, as reported by diariodesevilla.es.