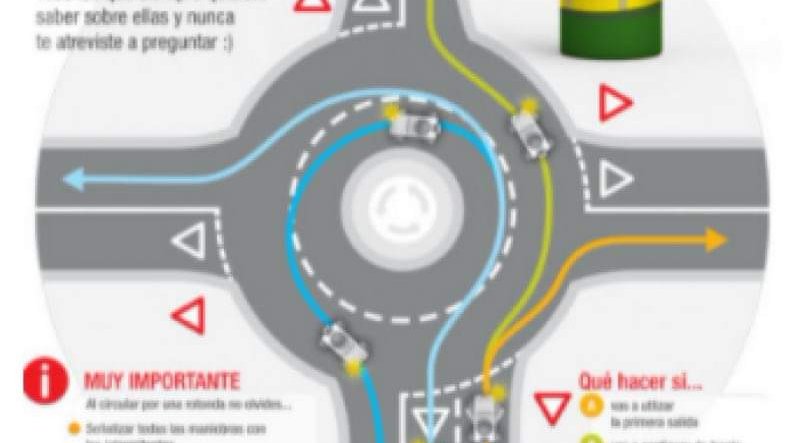 Spain’s Direccion General de Trafico (DGT) have issued a new guide in Traffic and Road Safety magazine going into detail on roundabout rules. This comes after new reports say one in ten accidents that cause injuries occur on them. The DGT said: “many people still do not know how to use them correctly”, and a recent survey seemed to prove this correct. When polled, 60% of drivers did not indicate correctly when using a roundabout.

The first-ever roundabout was created in Letchworth Garden City in the UK but the first to be built in Spain came in 1976. Now there are more than 38,000 across the country. There were 45,000 accidents that caused injuries between the years of 2015 and 2019 that took place on roundabouts, as reported by the European Motorists Association. “It is therefore urgent to explain, once again, how to navigate a roundabout safely”, the DGT said in their statement.

The DGT roundabout rules are explained in their guide. “There are three key moments when we approach a roundabout: the entrance, the interior circulation and the exit. And in all these moments it is necessary to be clear about how to act”, the guide explains. The approach and access to the roundabout are critical moments, in which more than half of the accidents (54%) occur, according to a study by the insurer AXA. “When accessing a roundabout, you have to anticipate, observe and respect the signs. And above all, enter at an adequate speed ”, they explain from the DGT Driver Training Area.

The most frequently asked question is also covered in the roundabout rules explanation. “Is it allowed to exit the roundabout from the inside lanes?” and the answer is no, as a general rule. The DGT state that you should leave by the right outside lane to avoid one of the most common infractions of the area. This crossing from the inside lane causes many collisions as other cars use the lanes correctly.

Let’s hope with these explanations the DGT can help cut down the number of accidents on Spain’s roads.