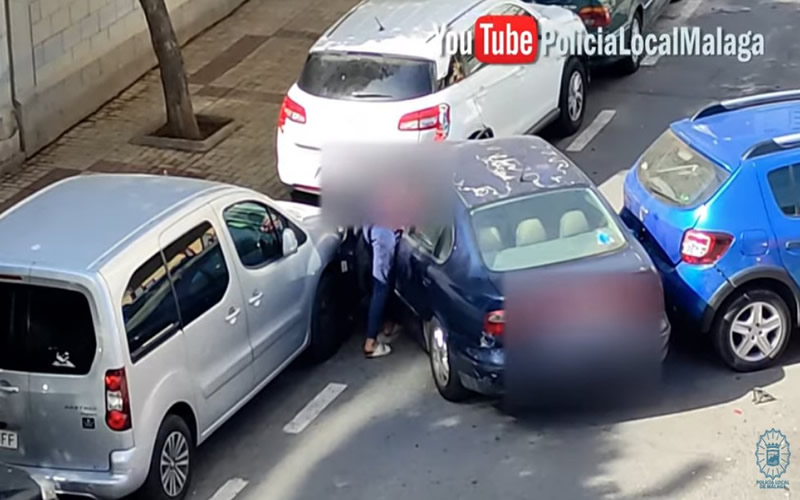 Arrested in Malaga for crashing into nine vehicles while driving a stolen car. image: youtube

Malaga Local Police officers have arrested a 20-year-old young man of Moroccan nationality as the alleged perpetrator of a crime of damages. This came after a traffic accident occurred, in which a total of nine parked vehicles were damaged. The car that caused the damage had since been found to be reported stolen, while the arrested person does not have a driving licence, and is in Spain illegally.
The incident took place around 3.15pm on Saturday, October 16, when the youth drove his Seat Toledo vehicle at high speed in Plaza Conde de Ferreria, hitting several cars, damaging nine of them. A video of his actions has gone viral on social networks, which you can watch below. After causing the carnage, he calmly exited the car and walked away on foot acting as though nothing had happened, but as he rounded the corner, he started running.
The Local Police Room 092 number received numerous calls informing them of the event, with officers attending the scene and taking statements from witnesses. Upon running a check on the vehicle, it was established it had been reported stolen the day before, Friday 15. It was towed to the pound and its original owner contacted.

One day after the incident, on Sunday 17, the suspect was spotted at around 12.15pm by police officers inside an apparently abandoned vehicle on Calle Poeta Muñoz Rojas. They recognised him from descriptions given by witnesses, and a search of his backpack uncovered the same clothes he had been wearing in the videi footage.

After being identified, and questioned by the police officers, the individual acknowledged that he did not have a driving licence. He even freely and spontaneously acknowledged that he was the perpetrator of the damage to the vehicles. The young man was arrested and transferred to the police station, where, while consulting his administrative situation in Spain, they found that he was in an irregular situation in the country, as reported by laopiniondemalaga.es.