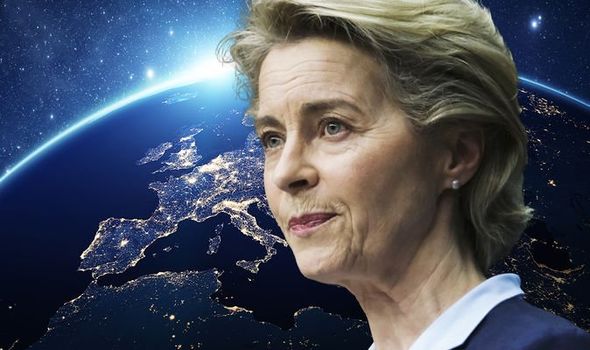 The EU has banned the UK from a €95 billion research and innovation project over the continuing Brexit row.

The European Union has ‘blown its top’ and banned the UK from participating in the Horizon Europe project, with officials citing the deepening row over the Northern Ireland Protocol. The European Union’s Commissioner for Innovation and Research, Mariya Gabriel, has confirmed the UK will not be able to join the programme until the question of Northern Ireland is resolved.

Horizon Europe is the EU’s signature funding initiative that pools in more than €95billion (£80billion) for research and innovation. The UK and Switzerland have been prevented from taking part in the programme, with Ms Gabriel warning “transversal issues need to be tackled first”.

The chaos and confusion surrounding the diplomatic row have now affected the UK’s participation in the Horizon Europe project. Ms Gabriel told ScienceBusiness: “Association is a thematic subject, and I am confident that we are ready to tackle it as soon as possible, but transversal issues need to be tackled first.”

The EU and the UK were on a collision course last week over the role of the European Court of Justice (ECJ) in the Northern Ireland protocol.

Downing Street said the ECJ role in ensuring compliance with the rules of the protocol is “a central issue” for the UK, however, Irish Government officials said that nobody in Northern Ireland had raised the ECJ as an issue.

A Northern Ireland business group also said that nobody had complained about the ECJ role.

“In all the months since the whole operational plan of the protocol was agreed and throughout this year, no one in the business has raised the issue of the ECJ oversight as a problem for them in my presence,” said Stephen Kelly, chief executive of business representative group Manufacturing NI. “It is purely a political and sovereignty issue, and not a practical or business issue.”

The project tackles climate change helps to achieve the UN’s Sustainable Development Goals and boosts the EU’s competitiveness and growth.

The programme facilitates collaboration and strengthens the impact of research and innovation in developing, supporting and implementing EU policies while tackling global challenges. It supports creating and better dispersing of excellent knowledge and technologies.