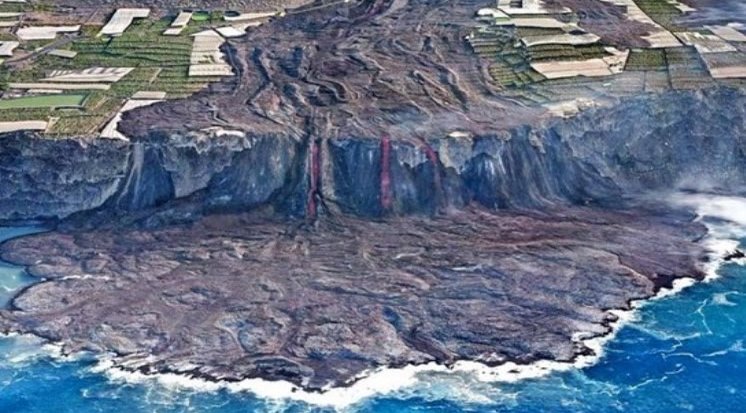 Authorities on the island say the La Palma lava flow is now ‘dangerously close’ to the sea.

The second lava flow of the La Palma volcano is now about a hundred metres from the sea and more confinements could be triggered at any moment. The lava flow has continued to evolve, albeit slowly. Red hot magma is now heading towards the west of the island and the second river of lava that is expected to reach the sea is already about a hundred metres from the coast where it is expected to plunge into the sea and cause toxic gas clouds.

As happened with the original lava flow, when the lava comes into contact with the seawater, small explosions with the release of hydrochloric acid occur, if so, new confinement of residents in the area could be decreed.

The area affected by the volcano is already 789.6 hectares and 1,956 buildings have been destroyed. The width of the lava flows at the lowest point is 2.9 kilometres.

Yesterday, Monday, October 18, classes were resumed in about twenty schools in the municipalities of Los Llanos de Aridane, El Paso and Tazacorte, a measure that involved a total of 4,606 students and 583 teachers.

The human cost of the crisis

It is difficult not to read about the Cumbre Vieja volcano, a humanitarian disaster that has attracted worldwide attention. However, let us not forget that it is also unsettling, sad, cruel and desperate for the residents on the island. The Palmeros and Palmeras have now spent a month without respite on an island facing a social and economic disaster, the only relief is that there has been no personal damage- solidarity though, like the eruption, does not recede either.