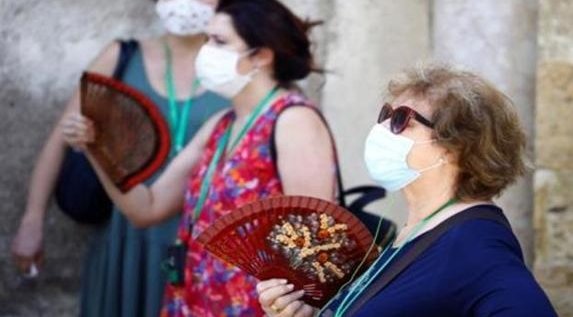 Aemet has forecast ‘Hot Terral Winds’ will breeze over the region of Andalucia on Thursday, October 21.
Aemet, the Spanish Meteorological Agency, has forecast a *Terral for Thursday, October 21. Although it will not be as strong as on previous occasions, it will raise temperatures above 30 and up to 31 in the capital, Malaga, Estepona, Vélez-Málaga, and surrounding areas.

Meteorological situations such as the one that will occur on Thursday have two meanings: a positive one, with the arrival of a clear summer day on the beach in the middle of autumn  ‘veroño’). And the negative, because of what this sudden change in temperature can mean for colds and the flu.

It is not unusual but it is rare, ”says José María Sánchez-Laulhé, director of the Aemet Meteorological Centre in Malaga, who commented on the fact that the skies will be slightly cloudy and the wind will be light, “it will be a clear summery day at the beach. The minimum temperature during the day will be 14-15 degrees, and from midday, it is expected that the high will hit,” he said.

On Thursday, just before midday, the eastern winds will bring the maximum temperature back down to 25 degrees. This thermal change can cause colds and flu and further temperature drops can be expected due to the humidity from the east.

No rain expected until November

No significant rains are expected for the remainder of the month. “No situation of heavy rainfall is clearly seen.” The accumulated until October 18 is only 0.7 l / m2 at the airport.

“The weak rain shower that is expected will not leave even half a litre per square meter,” said the director.

*The Terral is a type of wind and its formation is as follows: when the solar radiation disappears (the sun goes down), the sea surface retains the heat captured during the day for longer than the land, which cools faster, thus leading to a hot breeze.