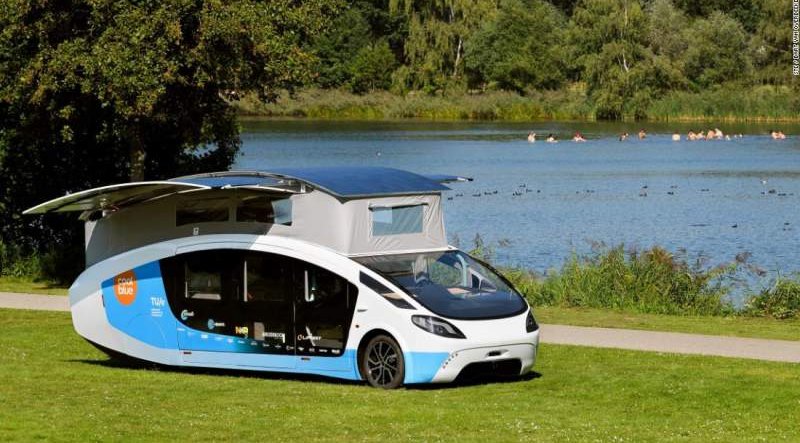 A fully solar-powered campervan has just finished touring Europe without the need to charge.

A campervan named “Stella Vita” has travelled almost 2,000 kilometres (1,242 miles) along the highways of Europe without stopping for fuel or plugging in to charge. Described as a “self-sustaining house on wheels,” the ‘green energy’ campervan has solar panels fitted to its roof and is powered by just the energy of the sun alone.

The interior is fully equipped with living essentials including a double bed, sofa, kitchen area and a bathroom with a shower, sink and toilet. It can fit two people, who can drive, cook breakfast and watch television using just the vehicle’s solar-charged battery, according to its creators — 22 students at the Eindhoven University of Technology in the Netherlands.
“The main goal is to really inspire people and the market and society to accelerate the transition towards a more sustainable future. What we’re trying to do is to show people and show companies what’s already possible,” said 21-year-old Tijn Ter Horst, a member of Solar Team Eindhoven 2021, which made the vehicle, with funding from sponsors.

The team started brainstorming for the project last September and took just two months to come up with the idea for Stella Vita. From November 2020 until March this year, they designed the campervan and their first aim was to make it as aerodynamic and lightweight as possible while still making it look good.

By July, they had finished building it and started to test the vehicle on the road. The camper was granted a license for its use on public roads at the beginning of September and began its European tour later that month.
After starting in Eindhoven, the team ended their journey in Tarifa, the southernmost tip of Spain, on October 15, a 3,000-kilometer (1,860-mile) journey. Technical issues at the start of the tour meant that the camper initially had to be transported using a trailer. However, once resolved, it was able to drive almost 2,000 kilometres.
“It’s a very particular looking car so when you’re driving through, for example, Paris or another city, all the people are there waving, taking photos. It’s great to see what we achieved in one year and we’re really looking forward to inspiring even more people,” said Horst.

The vehicle can typically travel up to 600 kilometres (373 miles) on its 60-kWh battery when fully charged, even at night and when it is cloudy. On a day when the sun is shining throughout, its range increases by an extra 130 kilometres (81 miles). The team drove approximately 300 kilometres (186 miles) between each destination, at a top speed of 120 kilometres (75 miles) per hour.