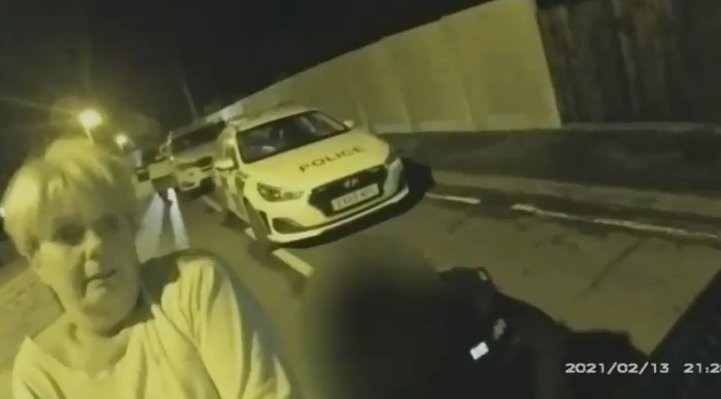 Wife who killed husband told cops she "should have stabbed him more". image; twitter @5 News

Penelope Jackson, aged 66, on February 13 of this year, stabbed her 78-year-old husband three times, and left him to bleed to death in the kitchen of the bungalow they shared in the quiet village of Berrow, Somerset.

David, a retired lieutenant colonel in the military, had managed to call the 999 emergency services before losing consciousness. His wife then continued the call with the first responder, telling her exactly what she had just done to her husband, saying that he was, “in the kitchen bleeding to death with any luck”.

Despite pleas from the call handler during an 18-minute conversation, while offering advice on medical assistance she could give him until an ambulance arrived, Jackson continually refused point-blank to do anything to help her stricken husband of 24 years.

Now that the prosecution case has ended, this incredibly chilling conversation between Jackson and the emergency services operator has been released, along with bodycam footage from the moment when she was arrested.

In the hearing, Jackson was in front of the jury charged with murder. She denied this charge, instead, she accepted a charge of manslaughter, claiming that she had been in an abusive relationship and was looking for a way out. Her husband died from the stab wounds, and the hearing continues.

Jackson can be heard in the audio telling the operator, “I killed my husband because I’ve had enough. I might go and stab him again. I am in the lounge, he is in the kitchen bleeding to death with any luck. He threatened me before, but he’s not threatening me now”.

She continued, “I know this is being recorded. I am compos mentis, but I have had enough of the abuse and the nastiness. I am not doing anything to help him. He deserves everything he has got – I accept everything that is coming my way”.

“I might just go and do it again. I did it the once and then he said ‘I wouldn’t do it again’ so I did it twice more”, she adds, before telling him she thought she had stabbed David in the heart, but that, “He doesn’t have one”.

While being led out of her home and to a patrol car by police officers, she calmly asks them “Can I get my coat?”. In the background, somebody can be heard telling paramedics to get inside “pronto” and perform CPR on David, at which Jackson is heard to comment, “Oh don’t! No no no, please don’t. I should have stabbed him a bit more”. She then once more asks the cops to go and fetch her coat.

As she was being arrested, officers had advised her to remain silent and wait until she had taken legal advice, but she told them, “There’s nothing. I did it. Why I did it is a different issue, but I did it. Remorse is easy, it’s been a long time coming – I did it, I’m guilty”,

Before adding, “If I was given the chance, I’d do it again, even if they locked me up for 125 million years it would still be worth it. I should have walked away years ago but you don’t, I deserve everything that is coming my way because you shouldn’t do what I did. Sometimes you’ve got to do what you’ve got to do”, as reported by thesun.co.uk.

Penelope Jackson has admitted to manslaughter but denied murdering her husband David in Somerset this year.

She says he was controlling and violent towards her – and told police she "should have stabbed him more".