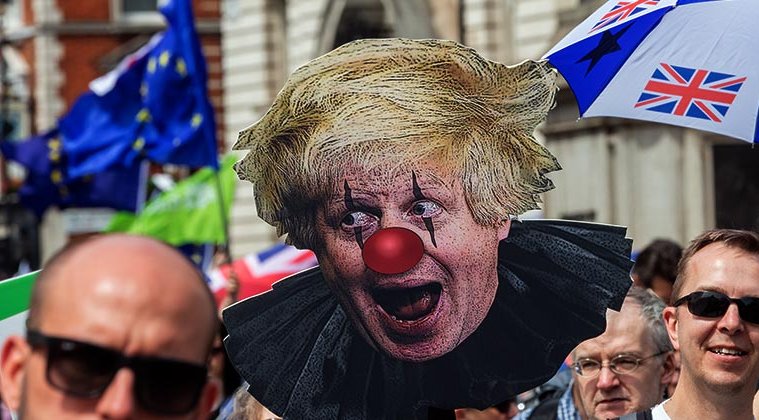 Clown or Joker? It comes to the same thing.

EVERY time I see an image or hear the mutterings of the UK’s Prime Minister, I despair. This is an office once held by Churchill, Attlee, Macmillan, Thatcher and Blair – all with their strengths and their shortcomings. Because the UK is still one of the most influential nations on the planet, its Prime Minister has a universally high profile.

In Europe and beyond, Boris Johnson is widely regarded as a joker (a clown) but, in fact, he is quite a danger to his country for several reasons.

First, he cannot be trusted. He hoodwinked the voting public with lies over Brexit and he seems incapable of giving a straight answer. Anybody who has watched the weekly farce of Prime Minister’s Questions will have noticed this. He evades every question by going off on a tangent, changing the subject or quoting meaningless statistics. He repeats the same old dogma over and over again (“we have the fastest growing economy ….” “let’s get this thing done ….”).

Second, he is a naïve optimist, just hoping that everything will be ok, regardless of the gravity of the situation and the facts. A leader, while not being a negative pessimist, has to be honest with the media and the voters.

Third, he seems immature as a person. While he likes posing in front of a camera, he looks ill-at-ease in the presence of leaders such as Merkel, van der Leyen, Macron and Biden. He is often less than coherent and he has been heard mumbling in Latin! Some of his jokes are not in the best taste.

He admits to being proud of his achievements. Under his watch, the UK has the highest rate of Covid deaths in Europe and the fourth highest number of reported cases in the world. The care homes tragedy was the result of hesitation and poor judgement and the NHS is unable to cope. We have rampant inflation, rising taxes and the scrapping of universal credit.

In spite of underemployment, there are serious labour shortages. There have been queues at petrol stations and empty supermarket shelves. Immigration policy is confusing. We are isolated from our European friends and the government is unable to secure adequate trade deals.

Johnson holds nobody accountable for their misdemeanours, from Dominic Cummings and Matt Hancock to Cressida Dick. The first two violated Covid rules while the Metropolitan Police Commissioner, having effectively ordered the murder of an innocent young Brazilian in 2005 (and been promoted and honoured), now presides over a police force incapable of protecting women.

He is reactive rather than proactive. Owing to an absence of strategy and forward planning, there are frequent U-turns and back-tracking. Despite this, Johnson never admits he is wrong.

The UK needs a leader with sound judgement, commanding authority and respect. I can’t see anybody in either of the major parties. I am not suggesting we need Gordon Brown again, but suddenly he doesn’t look so bad.