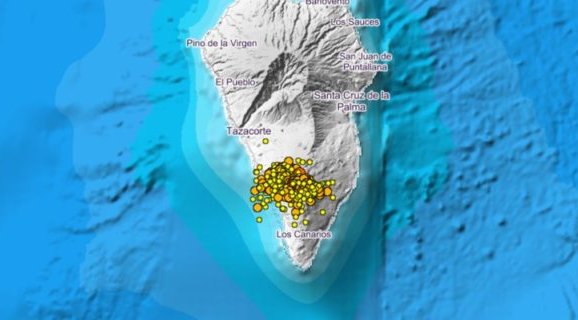 La Palma was rocked late last night by its most intense earthquake since the island’s volcano started to erupt a month ago. The quake, of magnitude 4.8 on the Richter scale, was felt not only across the whole of the island but also in the north of the neighbouring island of Tenerife.

The second red-hot lava flow is now precariously just 30 metres from the sea, local residents in the area have been warned to stay in their homes due to the high risk of explosions and toxic gases.

According to data released by the National Geographic Institute, the quake was registered just before 11:00 pm last night at a depth of around 39km in the municipality of Mazo.

According to its classification from the scientific centre, it was a strong earthquake felt across practically the whole island. A resident of Villa de Mazo on La Palma said: “This quake is the strongest one I’d felt in La Palma’s volcano episode.”

Another told Volcanodiscovery.com: “That was by far the strongest. I thought someone had crashed a truck. Afterwards, I could still feel if there was slight wobbling just in my feet like larva running under surface.”

And another posted: “The most violent quake so far in the last few days. House shaking and creaking. Barking dogs.”

On the neighbouring island of Tenerife, residents in the north reported light to moderate shaking, with one posting: “Walls, roof and wardrobes rattling, very scary.”

During the night, 14 earthquakes were registered, the largest, 3.4, was located northeast of the municipality of Fuencaliente at 2.54 am this morning, Friday, October 22. This morning, scientists dismissed reports that preparations being made to evacuate the whole of La Palma were completely false and malicious.

Since the beginning of the volcanic eruption, the total area affected has already reached 779.89 hectares, nearly 2,000 properties have been destroyed and over 6,000 people have been evacuated from their homes.