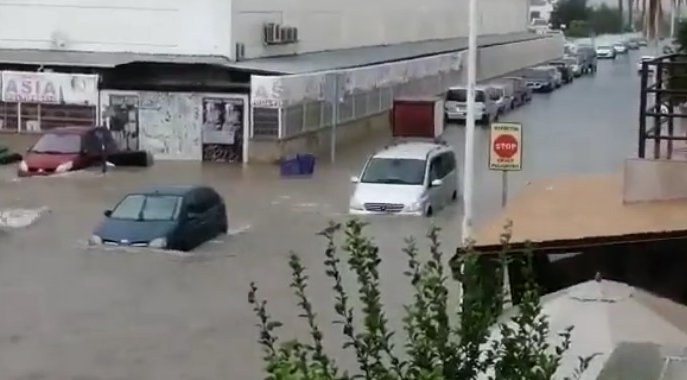 According to the State Meteorological Agency, AEMET, Alicante province endured some exceptional spells of rainfall during Friday, October 22. In the southern half of the Valencian Community, especially in the Vega Baja del Segura area, where the Dama de Guardamar school was forced to be evacuated.

As reported by the Emergency Coordination Centre on its Twitter account, around 30 cars were reported as stranded in floodwater caused by the heavy rains in urban areas of this Alicante region.

By about 2pm the rains had stopped and started to head north from Vega Baja, where they hit Baix Vinalopo and Alicante. Here the storms deposited significant amounts of more than 70 litres/m² of rain in the municipality of Torrevieja.

The regions of l’Alcoia and Comtat were not left out either. Rainfall affected practically all the municipalities in the area with various levels recorded, although according to Avamet data, the highest figure by far was recorded by the Font del Baladre meteorological station in Muro, with 42.6 litres/m².

This is surprisingly high data compared to the Serra de Mariola, because in neighbouring municipalities such as Agres, the highest record was 27.8 litres/m².

Maximum orange notice for the Valencian Community on Saturday 23

AEMET has extended and raised its alert for Saturday 23 in the Valencian Community, moving to a maximum orange level. This can mean locally heavy, or even very heavy rainfall in the southern half of the coast, predicting up to 100 litres/m² in 24 hours in some areas.

This could well be accompanied by a storm in the morning, which may be locally persistent. On Sunday 24 there should be slightly cloudy or clear skies, with some intervals of medium and high cloudiness in the afternoon. Fog banks or morning low clouds are foreseen in the interior of Valencia and Alicante, as reported by lasprovincias.es.