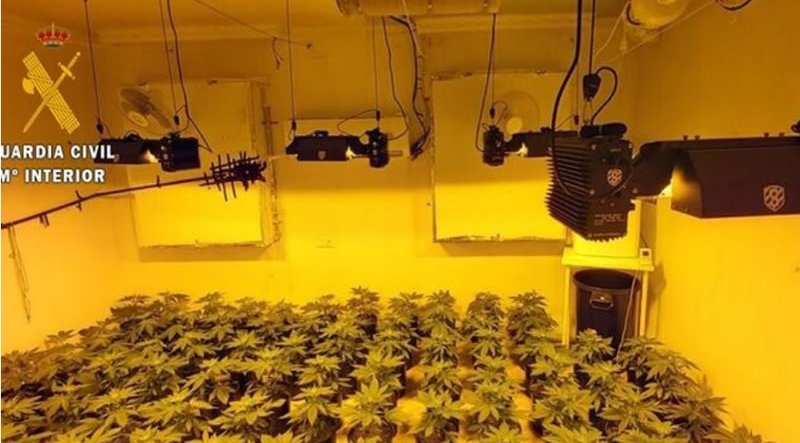 A judge in Almeria today, Saturday, October 23, decreed the entry into provisional prison, for a Guardia Civil lieutenant of the Almeria Command. The judge declared prison is avoidable on payment of €30,000 bail.

The police officer was arrested earlier this week during a macrooperation against marijuana. Investigators had focused on a group that allegedly used the cultivation of hemp to cover up their illegal activity.

This information was confirmed to diariodealmeria.es by judicial sources, who added that bail of €36,000 has been agreed for each of the other 13 detainees arrested in operation ‘Indalo 67-Boquera’. The Guardia Civil has charged those arrested with crimes against public health, neglect of the duty to prosecute crimes, and the disclosure of secrets.

According to a statement from the Almeria Command itself, during the ‘Indalo 67-Boquera’ operation, 156,314 cannabis plants and 6,000 kilograms of marijuana buds were seized. These discoveries were made after seven searches of homes, professional offices, and social headquarters. Evidence was also obtained in the searches, linking all the detainees to the crimes under investigation.

Frequent inspections are carried out by the Guardia Civil to control the cultivation of industrial hemp in the province of Almeria. It was during one of these inspections that officers located the illegal crops, confiscating a total of 156,314 cannabis plants whose production was not intended for industrial purposes.

The Benemerita highlighted that due to the large number of plants intervened, this type of action entails a great effort in the cutting process to proceed later with their destruction. They also emphasised that the cultivation of hemp is allowed only if it is intended exclusively for industrial purposes.

This means the crop is only legal when its cultivation is intended purely for the production of fibre or seeds, or if grown with the express authorisation of the Spanish Agency for Medicines and Health Products (AEMPS), and intended for scientific, medical, or research purposes.

The proceedings, drugs seized, and the detainees, have been made available to Almeria’s Court of Instruction No2. Police sources said the operation is still open, and that new arrests are not being ruled out, as reported by diariodealmeria.es.