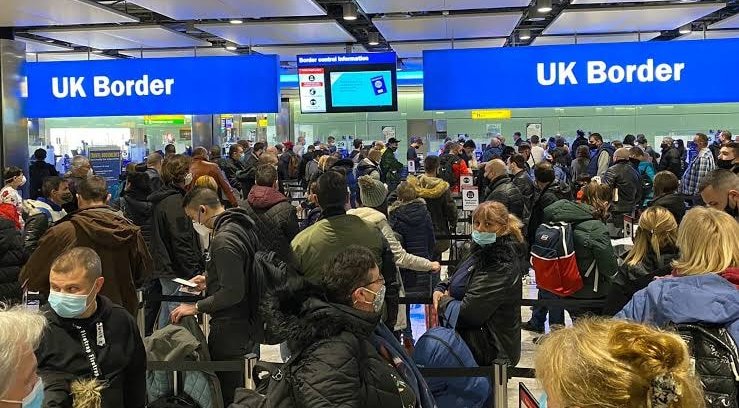 Passengers at the UK’s busiest airport were raging after being held up in huge delays at immigration control today (Saturday, October, 23) as they complained of hours-long queues, according to The Daily Mail.

A spokesman for Heathrow airport said that the delays are being caused by health checks- despite the same measures being in place for months.

One passenger raged: ‘You should be fined. There are about 25,000 people waiting for passport control… you have got to be joking.’

Another said: ‘You really out to sort out your immigration lines if you want people to continue to travel through Heathrow and with BA! ‘Simply shocking today. I think I circled Terminal 5 three times at this point!’

Travel industry experts have repeatedly warned the chaotic scenes seen in the wake of the country reopening are blighting the UK’s global reputation while running the risk of a spike in Covid cases – further jeopardising the already crisis-hit tourism sector.

Tory MPs are demanding answers from the head of Border Force over the Heathrow queuing scandal seen in recent months.

Passengers arriving at Heathrow airport on Wednesday, October 6, also reported delays of several hours after the self-service passport gates failed, according to a report from Yahoo News. A witness on the ground said they are now back open (11.30 GMT) but added that queuing lasted for at least two hours on Wednesday morning.

Travellers at Terminal 5 shared images of long queues on social media, while others said they were held back on planes that had just landed due to the congestion.