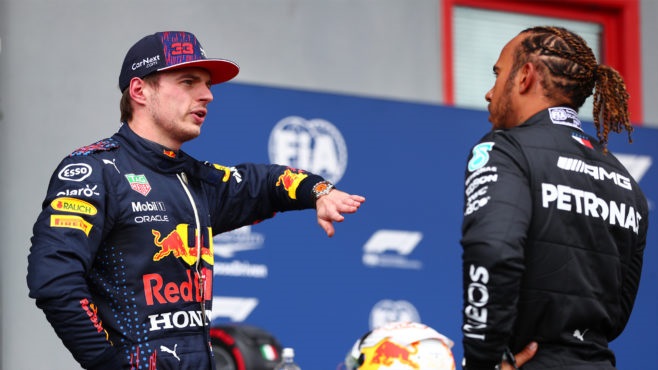 Max Verstappen and Lewis Hamilton are starting alongside one another at the United States GP. The pair will line up on the front row of the grid at the Circuit of the Americas, Verstappen having pipped Hamilton to pole position by 0.2s.

However, while the Dutchman is chasing his first-ever win at the United States race, Hamilton is after his sixth title.

“Yeah, I hope we’ll make it through Turn One and we get a good race. I don’t think it’s all decided on Turn 1. It is all fun and games. We are going to have fun and give it everything as you would expect. It is no real difference to any other part of the season,” said Hamilton.

“Like we always try, as professionals,”  “I don’t see why we always have to keep bringing this up,” said Verstappen, 24, sitting in the pole position chair while appearing to take umbrage with the line of questioning.

Red Bull has received permission to “beef up” the rear wings on both cars at the United States Grand Prix after discovering a crack on Max Verstappen’s.

Crew spotted the issue prior to qualifying, which resulted in them strengthening the wing on both of their cars. Although Red Bull isn’t exactly sure what caused the problem at this point, they said there will be a closer inspection before the race.

“There’s always something going on, there’s never a stress-free session,” Horner told Sky Sports. I don’t know whether Max hit something, because there’s quite a crack, and nothing on the other car or any of the other wings, so we got permission to beef it up a bit on both cars. We’ll have a closer look at it.”