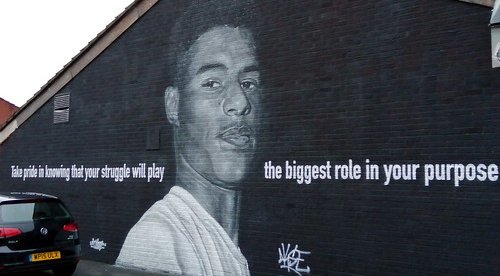 Chancellor Rishi Sunak has tossed aside calls from Marcus Rashford to extend free school meals out to millions more children across England when he announces his budget this week. The Manchester United star has the backing of major supermarkets for his campaign. This push for extra meals comes as pressure is mounting on the Chancellor to do more to assist struggling families. Even fellow Tories are urging Sunak to ‘soften the blow’ of the Universal Credit cuts that have recently come into force to ensure that Britain is able to ‘level up’ post-pandemic.

Marcus Rashford is supported in his push by Sainsbury’s, Waitrose, and Marks & Spencer. They’ve co-signed his appeal as he said the lack of funding would “both deepen and extend the scarring caused by the pandemic on our youngest citizens and ultimately our economy”. He pointed to the aim of levelling up the country and emphasised that it should “surely” start with making sure “every child in Britain can eat well at least once a day”.

However, the Chancellor has set aside the requests and stated that a ‘more normal way of doing things’ has been transitioned into by the government post Covid-19. Speaking to the BBC he said: “We put in place some measures to help families during coronavirus, that was the right thing to do, and in common with the other things that have now come to an end, whether it was furlough or other things, that’s right that we’ve transitioned to a more normal way of doing things. We have actually already acted, is what I’d say to Marcus and everyone else. We’ve put in place something called the holiday activities program, which provides not just meals but also activities for children during holiday periods for those families that need extra help.”

Former welfare chief Ian Duncan Smith spoke to The Observer newspaper and asked for a softer approach from the Chancellor. He said: we are not in the same situation as in 2010. We shouldn’t think of ourselves as in a Treasury orthodoxy, which is that we somehow have to claw back (spending) straight away. This is more like a war debt. Universal Credit is about people’s lives. If you help support them they pay you back.”