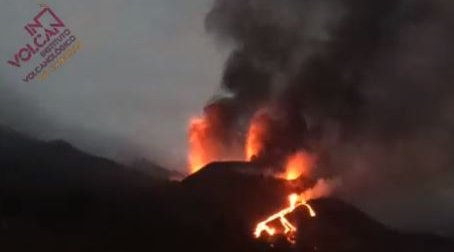 Spain pledges millions more in aid to La Palma. Prime Minister Pedro Sanchez has visited the island for the fifth time since the volcanic eruptions began.

La Palma’s volcano began erupting on September 19. Businesses and homes have been destroyed since. The volcano shows no signs of stopping at the moment. Lava is still flowing after more than a month.

Sanchez has confirmed that the Spanish government will provide millions more in aid for La Palma. New legislation will be passed to provide the new funding.

The government has already announced over 60 million euros in direct aid. Farming and fishing industries on the island have been severely impacted and expect to see 6 million euros in aid too.

Over 2000 buildings have been damaged due to the lava flowing from the Cumbre Vieja. The damaged buildings are mostly houses and farms. Lava has covered around 850 hectares of land.

As lava hits the sea the island is growing in size. Numerous earthquakes have also been felt on the island. So far over 7,000 residents have been evacuated. The authorities have worked quickly to ensure that lives were saved.

Over 400 people are said to be in temporary lodgings. These lodgings have been provided by the government. Many people have been taken in by friends and family too.

The Canary Islands president Ángel Víctor Torres has warned that the eruptions will continue. He commented: “We still have weeks ahead of us,”

“We are living through some very difficult times. (But) no resident of La Palma will have to leave the island to continue their lives.”