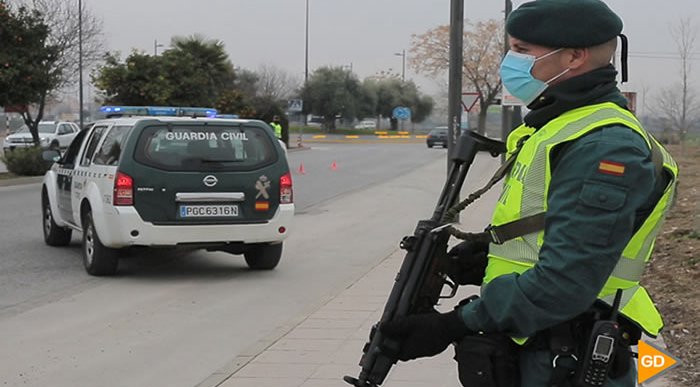 Guardia Civil officers launched a counter-terrorism operation that lasted barely a few minutes from start to finish on Friday, October 22. As a result, specialised officers from the Guardia Civil’s Rapid Action Group arrested two suspected jihadists. This operation was carried out in the centre of Malaga city, on Spain’s Costa del Sol, in the middle of the afternoon.
Residents of the Lagunillas neighbourhood were stunned as a white undercover police van shot at full speed into the area and screeched to a halt. They then witnessed fully armed police officers wearing ski masks pile out of the vehicle and running at top speed into the small square located just off Calle Esperanza.
They immediately pounced on two unsuspecting individuals who were alleged jihadist terrorists and incapacitated them instantly. The suspects were thrown to the ground and handcuffed.

More than ten officers were involved in the whole operation, with several pick-ups also pulling into the vicinity. All the officers carried long weapons, wore ski masks and had bulletproof vests on, and proceeded to carry out searches of neighbouring buildings.

What at first looked like an anti-drugs bust clearly caused great expectation among the residents who witnessed the whole event. Boxes were seen to be carried out of one of the buildings and placed in the police vehicle.

The nationality of the two detainees has not yet been revealed. Neither the Guardia Civil nor the Ministry of the Interior have been able to offer more details about the operation because it still remains open, as reported by laopiniondemalaga.es.