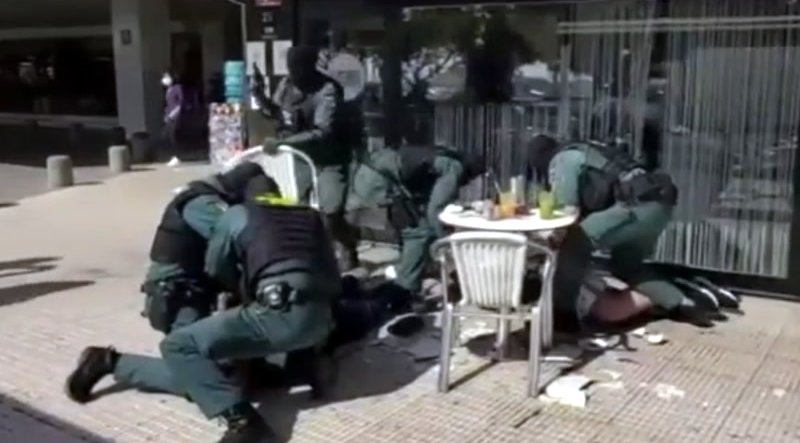 Ten seconds was all it took, from start to finish, for officers from the Guardia Civil’s Usecic unit to take down two high-profile suspected German drug traffickers. In a video recorded on the paseo in Palma de Mallorca, it can be seen exactly how well trained these operatives are. They are lightning-fast, and very precise in their actions.

The incident took place one morning early in April, while two apparently very dangerous criminals wanted by the German judicial authorities were sitting on the terrace of an establishment. Full facts surrounding this case have not been revealed by the police to date.
It is known that the operation was conducted after collaboration with German Police. These two individuals were allegedly being sought as suspected heads of a drug trafficking organisation in Germany. Intelligence reports had placed them to be in the vicinity of Palma de Mallorca.

Subsequent steps taken by the Guardia Civil’s investigation groups made it possible to locate the two suspects in Palma. They were two very large individuals who it was believed could be armed. Usecic was brought in to carry out the operation as they are trained in high-risk interventions.

Before the two men had a chance to react, a white camouflaged Guardia Civil van discreetly approached. Its doors burst open and five armed operatives jumped out and incapacitated the suspects. They were both taken down to the floor and handcuffed within ten seconds, unable to put up any resistance.
Allegedly, the two detainees were placed on board a flight to Madrid that same day, where they appeared before a judge in the National Court. It was left to the judge to approve their extradition back to Germany, to face the respective judicial authorities, as reported by laopiniondemalaga.es.