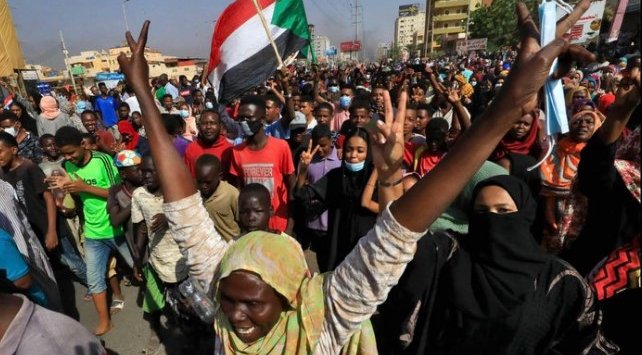 Crowds of protesters have reportedly taken to the streets of the Sudanese capital of Khartoum today, Monday, October 25. They were demonstrating aga¡nst an alleged takeover by the country’s military. It is believed that three people died when troops opened fire, and that dozens more have been injured.

Sudan’s new leader, Gen Abdel Fattah Burhan, said his coup had been necessary because of the constant political infighting within the civilian leadership. According to Al-Hadath TV, the General has allegedly had Prime Minister Abdallah Hamdok, and other political leaders arrested and placed under house arrest.

He has dissolved the civilian government and called a state of emergency. Reports are also rife of soldiers arresting the protest organisers after conducting a house-to-house search in Khartoum.

Omar al-Bashir, Sudan’s long-time ruler had been deposed two years ago, and a government of civilians replaced him. Since that time, they have been at loggerheads with the military, and today’s action has signalled the end result of this feud.

World leaders have strongly condemned today’s coup, with the US in particular very vocal. The Biden administration has apparently pulled the plug on a $700m (€602m) aid package.

Mohamed Osman, the BBC’s Arabic affairs reporter has told of large numbers of people out on the streets of the capital, as well as other major cities. These protestors are calling for the civilian leadership to be reinstated. One of the wounded told BBC reporters how he had been shot in the leg by soldiers. Another protestor said stun grenades were fired first, then followed by live rounds.

Al-Tayeb Mohamed Ahmed said, “Two people died, I saw them with my own eyes”. There have also been Facebook posts made by the union representing Sudan’s doctors, in which it claims the shootings occurred outside the main military compound.

Images have been circulating online showing one of Khartoum’s hospitals with people in bloodsoaked clothing and with various injuries. Despite the shootings and threats of more violence, BBC reporters at the scene said the protesters were not backing down. Roads around the city have been blocked with burning tyres and piles of bricks.

Flights in and out of the country have been suspended as the airport closed down, and it is said that telecommunications and the internet are being cut. It is also reported that doctors are refusing to continue their work in any hospital now taken over by the military, and staff in banks across Sudan have gone on strike, as reported by bbc.com.

JUST IN: Large number of demonstrators are on the streets of capital Khartoum in protest against the reported military coup in #Sudan pic.twitter.com/yocIaN7PvG