England stars take the knee ahead of T20 World Cup 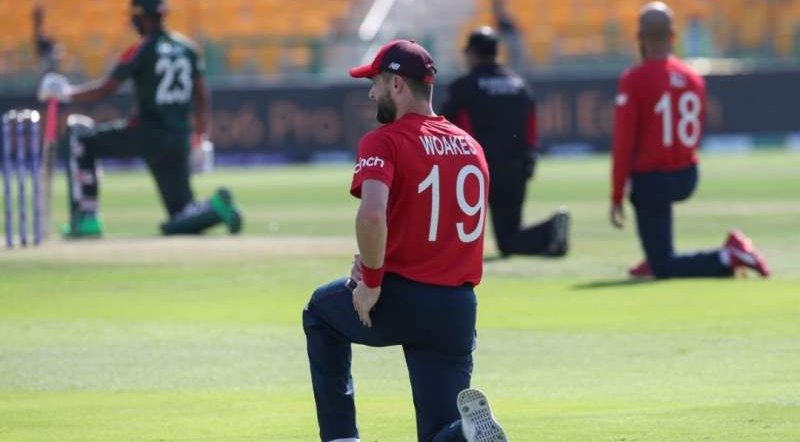 The stars took to the knee in solidarity against racism before the T20 World Cup clash with Bangladesh today, October 27.

Captain Eoin Morgan led his side in taking the knee, as well as doing the same in their tournament opener against the West Indies at the weekend.

The England team had initially asked the ICC if they could wear t-shirts with various anti-discrimination messages printed on them.

However, that this was blocked by the cricket governing body as it would have gone against rules around kits.

The rules are that items of clothing that display “messages which relate to political, religious or racial activities or causes” cannot be worn.

Despite this, the England players were pleased to take the knee publicly and show their support and solidarity.

Vice-captain Jos Buttler said: “Our position is we stand against any form of discrimination, which we’re very passionate about.”

“What we’d like to do is a moment of unity, which we did at times during our summer. West Indies like to take a knee, so we wanted to reciprocate that in the first game.”

It comes after South Africa star Quinton De Kock said he was  not available for his country’s game against Windies yesterday due to “personal reasons.”

It was later revealed that the reasons were based around a directive from Cricket South Africa which made it mandatory for its players to take a knee before all matches during the tournament.

A CSA statement said: “Cricket South Africa has noted the personal decision by South African wicketkeeper Quinton de Kock not to ‘take the knee’ ahead of Tuesday’s game against the West Indies.”

“All players had been required, in line with a directive of the CSA Board on Monday evening, to ‘take the knee’ in a united and consistent stance against racism.”

Skipper Temba Bavuma, the first black man ever to be a permanent captain of the South African national team, said he was “taken aback” by the news, but expressed: “Quinton is an adult. He’s a man in his own shoes. We respect his decision, we respect his convictions.”