Inner cone of La Palma volcano collapses in on itself 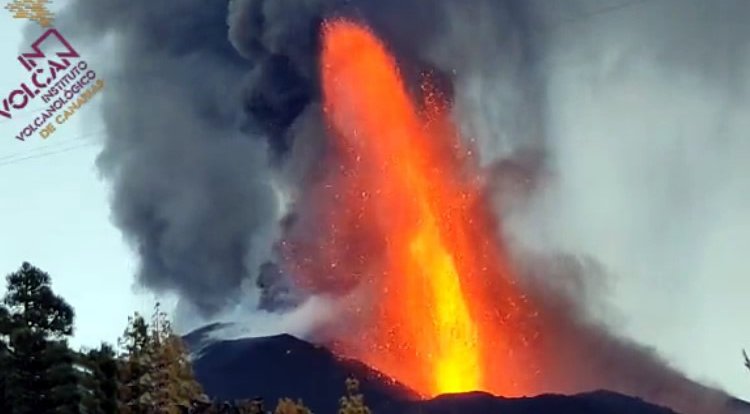 Inner cone of La Palma volcano collapses in on itself. image: [email protected]

As reported by Involcan, the Volcanological Institute of the Canary Islands, the internal cone of the Cumbre Vieja volcano on La Palma has collapsed in on itself. This occurred today, Tuesday, October 26, at around 6.50pm local Canarian time, and was posted on its social networks.

According to the latest report from the Department of Homeland Security (DSN), this has caused molten material to overflow in a more aggressive emission from the main mouth. During the last 24 hours, the evolution of the eruption has been marked by the modification and reconfiguration of the main cone of the volcano.

The Government of the Canary Islands has pointed out that the stream of lava that was affecting La Laguna has not undergone any significant changes. Even so, it is still being monitored constantly in case it is necessary to adopt new civil protection measures they said.

DSN reports that the column of ash and gases being emitted by the volcano has now reached an altitude of 3,800 metres. It also points out that the meteorological conditions currently show a good quality of air. As a result, this can help to restore normal operations at La Palma airport.

An earthquake measuring 4.8 magnitude was recorded on the island this afternoon by the National Geographic Institute (IGN). This tremor, at around 5.25pm, was so violent that it was felt in many parts of Tenerife, El Hierro, and La Gomera. It was located southwest of the municipality of Villa de Mazo, at a depth of 34km, with intensity IV EMS.

Immediately after this tremor occurred, a chain of five smaller ones reaching around 3.0 were registered in the space of just 15 minutes. Two of them had an intensity of II and III. Since last midnight, 59 earthquakes have been recorded on the island, 25 of them with magnitudes greater than 3.0 mbLg, as reported by cadenaser.com.