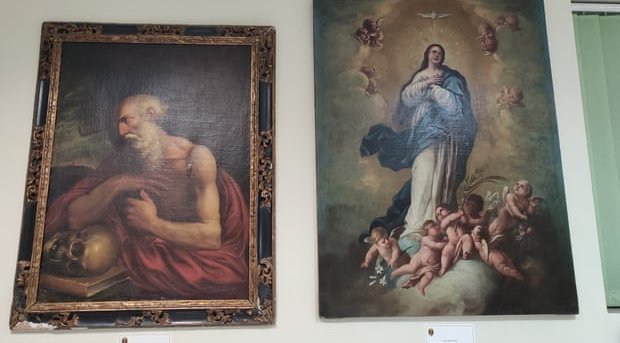 Spanish painting frauds were trying to sell works for €1.2m

The historical heritage group of the Valencian police have this week seen the culmination of their investigation into a large group of Spanish painting frauds. Six people have been sent to jail following a deeper look into paintings attributed to Francisco de Goya, Nicolas Falco and others, that were being sold online. The police seized 27 paintings in total and 18 of them turned out to be badly rendered forgeries.

The investigation started after some doubts rose about the history of one of the pieces being auctioned. The provenance of Falco’s The Adoration of the Three Wise Men had been purchased for €18,000 and was being resold for almost three times that amount. The painting was supposed to be 16th-century original but upon closer inspection turned out to be a forgery. As police followed the evidence of the people connected to that sale, it led them to a group of forgers who were trying to sell more than 30 other paintings online.

Officers seized 27 of the paintings with a value of €1.2m and uncovered an unsophisticated counterfeiting operation complete with faked certificates of authenticity. One of the paintings was purporting to be An Immaculate Conception by Francisco de Goya. The Spanish painting frauds tried to sell this particular piece for €900,000.

After experts were called in from various museums around Valencia, eighteen of the 27 paintings seized turned out to be fakes. Four items were decorative pieces, two were authentic prints, and the provenance of the last three could not be determined.

Gabriela Bravo, the regional justice minister, said the police’s efforts “had succeeded in shutting down a new illegal network that was buying and selling art and offering more than 20 works on the black market”.