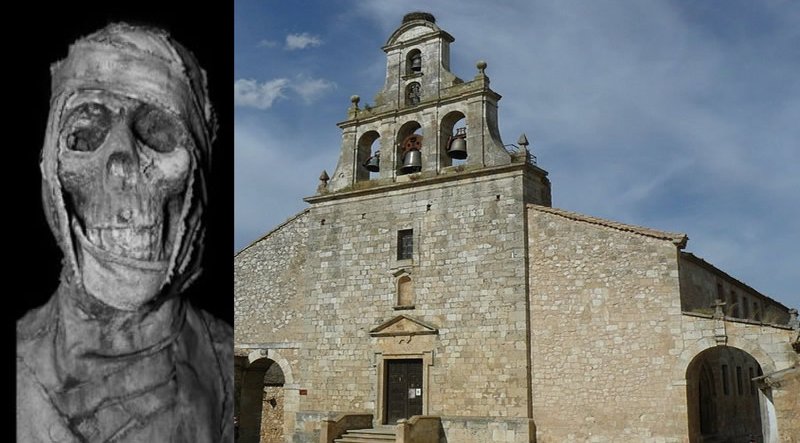 Mystery of the 500-year old Segovian mummy in Maderuelo

Considered one of the most beautiful towns in Spain, the Segovian town of Maderuelo hides a mysterious, and 500-year old unsolved history, that many people are not aware of. Despite having suffered numerous floods, and looting, this medieval location maintains all its charm.

Inside one of the churches of this Castile and Leon town, there is a Segovian mummy whose identity is still unknown. Local legend says that the mummy that inhabits the church of Santa Maria encompasses a great enigma. It is a mysterious mummy of a girl who rests eternally under glass, before the eyes of the thousands of tourists who go to visit her each year.

Although no one knows what illustrious character she may be, both the origin, the history, and even her name, are lost in time. Carlos Velazquez, the great writer, made an adaptation with ‘La Maiden Muerta’ (The Dead Maiden), of a legend from the 17th century that reads like this:

“Some say that she died during the absence of her father when he travelled to pay homage to the king, his lord. It was a time of noble brawls and civil strife. Others affirm that the plague took her away, which left so many orphans in Maderuelo. Her heartbroken father ordered her to be dressed in her best clothes”.

“She looked like a beautiful sleeping angel when that cold slab of black slate covered her sleep in the Chavez chapel, in Santa Maria. On the slab, coming from the Sierra, a stonemason sculpted a low-cut shield, quartered in a cross, with a rampant double-headed eagle, five keys, a tree among rampant dogs, and thirteen gold bezants, all good proof of his noble ancestry”.

“Buried the maiden, the wooden and inlaid casket where she kept her secrets also disappeared. Thus her psalter, her drawings, and secret love letters were lost, like those of that young lover who promised to return with the gold of Granada, and there she lost, her eyes first, and her life later”.

And so, according to legend, more than five centuries have passed with Maria’s body resting there, exposing her mummified body, as reported by 20minutos.es.