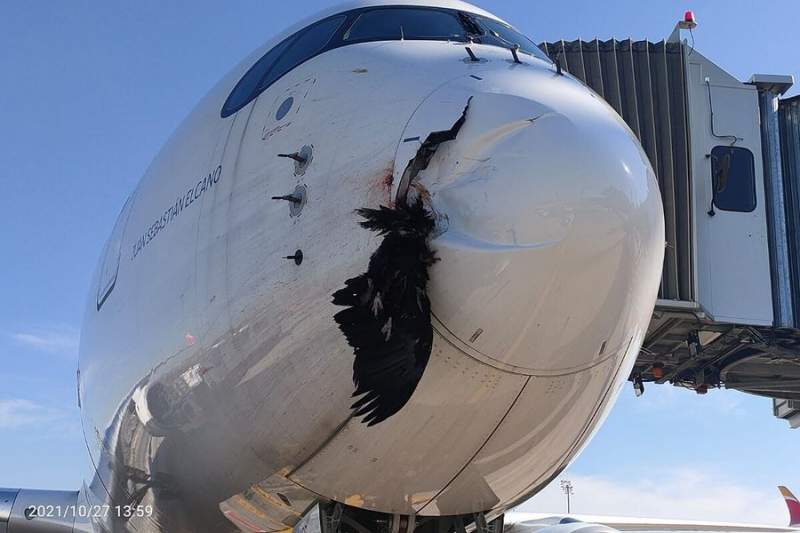 An Iberia Airbus A350 landed this afternoon at Barajas airport with a dead vulture embedded in the nose-cone of the plane where the radar is located. The Juan Sebastián Elcano flight, coming from Bogotá, was able to descend and land on the runway without any problems.

The incident occurred a minute and a half before landing on runway 32L, according to sources from the airline. The impact caused a large hole in the part of the fibre dome on the nose of the plane that protects the radar equipment, which, according to company sources, is “easily replaceable.”

These bird strikes can be very dangerous since the black vulture ( Aegypius monachus ) has an average wingspan of 2.5 meters and can weigh up to 12 kilograms.

In a Twitter post, an Air Traffic Controllers explained that despite the violent impact, the flight has landed without incident. The runway has been checked and the information was transmitted to the rest of the traffic in sequence.

A spokesman for Iberia Airlines said that after the impact there had been no shaking in the plane and that only the cabin crew has noticed the impact. Photographs of the damage have already begun to circulate on social media networks, attracting much attention due to the huge gap left in the front of the aircraft.

A Ryanair flight from Manchester Airport to Lanzarote was recently forced to Land in Liverpool after a reported ‘bird strike.’ The flight to the Spanish island of Lanzarote landed safely at Liverpool John Lennon Airport on the morning of October 13.

On January 15, 2009, a US Airways aircraft took off from New York City’s LaGuardia Airport. Two minutes after take-off, the plane was struck by a flock of geese and lost all engine power. With no option to reach an airport, the pilot expertly landed the aircraft on the city’s Hudson River, saving every person on board. The incident became known as the ‘miracle on the Hudson’. It was only a few birds that had caused the catastrophic failure of both jet engines that day.

Bird strike is quite common. In Australia, more than 16 000 bird strikes at airports across the country were reported between 2008 and 2017, according to Flight Safety Australia and can happen during any phase of flight, but the most vulnerable times are take-off, ascent, descent and landing, as birds fly at low altitudes.

Bird strikes cannot be completely prevented, but the careful planning and implementation of dedicated systems may help to reduce these accidents.