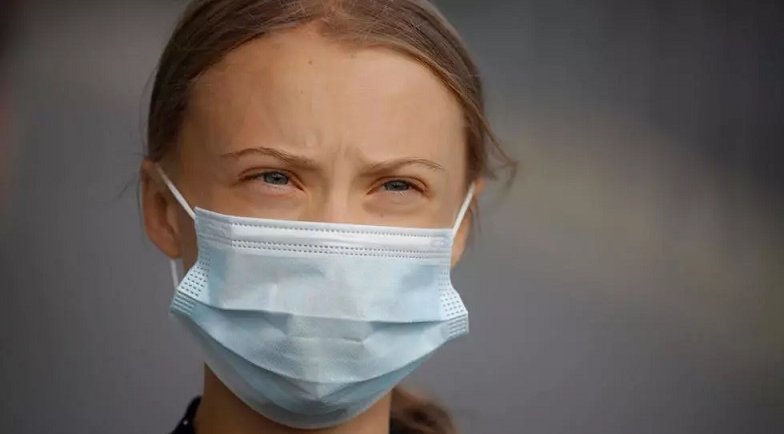 The young activist joined the thousands of people protesting across 26 countries and every continent in the world today.

She attended the Youth Strike to Defund Climate Chaos protest against funding fossil fuels which was held outside the Standard Chartered headquarters.

Greta joined in the chant of “We are unstoppable, another world is possible.”

Greta was joined by Vanessa Nakate, a Ugandan climate justice activist who recently appeared on the cover of Time Magazine, for several minutes before leaving as she was surrounded by the media and photographers.

Greta said she has not officially been invited to the COP26 climate summit in Glasgow.

She said in an interview with Andrew Marr that will be broadcast on BBC One on Sunday: “I don’t know. It’s very unclear. Not officially.”

She added: “I think that many people might be scared that if they invite too many radical young people, then that might make them look bad.”

From Monday, November 1, leaders including Boris Johnson will discuss how best the world can work together to stop climate change.

The Day of Action protests comes after the revelation that banks have paid £2,754,145,000,000 into the extraction of fossil fuels since 2015 when the Paris agreement was arranged and world leaders promised to limit the increase in temperatures to 1.5C and reach net zero emissions by 2050.

Joseph Sikulu, from Pacific Climate Warriors, said: “Financial institutions that continue to invest in dirty fossil fuel projects are also investing in the destruction of our islands and our homes.”

“It’s time for the corporations who have caused this crisis to be held accountable.”

“The science is clear. We need to do everything we can to limit global warming to 1.5C, the survival of our islands depends on that. To get there we need to defund the climate chaos.”