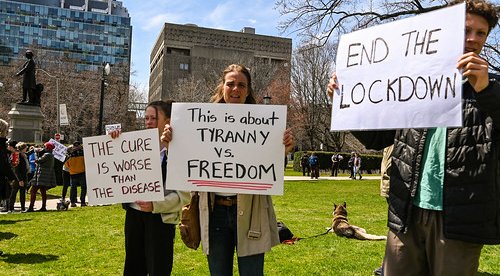 Liverpool headteachers have been targeted by ‘sinister’ intimidation tactics from anti-vax campaigners who object to the use of Covid vaccines on teenagers in schools. The groups have escalated from sending emails to leafleting students and entering school grounds.

“It started with a few emails from a group calling itself Lawyers for Freedom”, one headteacher told The Guardian newspaper. “An email is relatively easy to ignore.”

The main issues started when the protesters went one step further and started to wait for the children outside the school gates, “aggressively” leafleting the students and causing them upset. The headteacher called 999, but the police did not attend.

The protesters then gained access to the school and made it all the way to the headteacher’s office. They served quasi-legal documents containing warnings that if any child suffered death or harm from these ‘experimental vaccines’, the head would be held legally responsible. This has happened across a number of Liverpool secondary schools and the encounters are usually filmed on mobile phones to be posted on social media at a later time. The videos are shared by a group calling themselves Liverpool’s People’s Resistance and the posts name schools and even individual teachers.

Merseyside Police have stated that they are aware of anti-vax protesters targeting schools in the area and the local authority has been in contact to advise the headteachers on how to ensure the safeguarding of the pupils and staff.

“It was pretty aggressive,” admitted the school source. “They came up to reception asking to speak to the headteacher about a legal matter. They insist on reading from a script and they film the whole process on a mobile.

“Once they’ve handed the papers over, they tend to disappear. They’ve got the footage they want. It almost feels like it’s a trophy. There are Trumpian undertones to what these groups are doing. If they started describing themselves as patriots, I wouldn’t be surprised.”

In other areas of the UK there have been more protests by anti-vax parents and adults. Thames Valley police have investigated verbal assaults against a teacher and have been asked to lay on extra patrols after pupils were targeted by protestors. In Gateshead, students were left traumatised after being shown pictures of what appeared to be dead children.

Paul Whiteman, general secretary of the National Association of Head Teachers, called for protesters to behave more responsibly. “Whatever your views on vaccination, it is never OK to make children feel scared and intimidated as they arrive at school.”