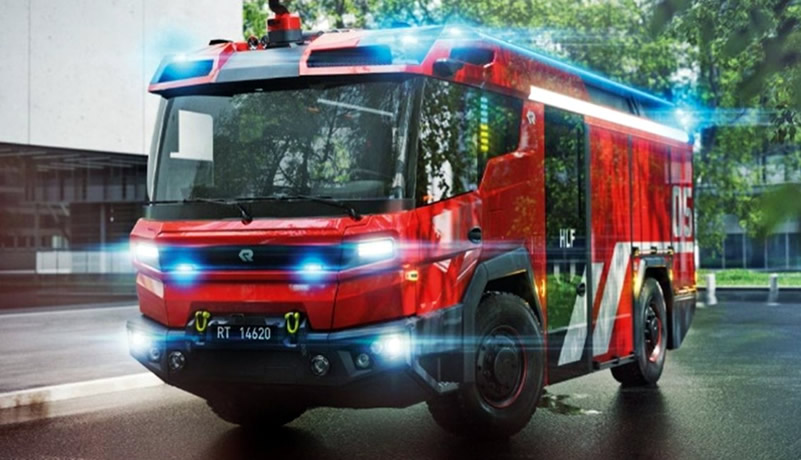 The world’s first 100 per cent electric fire engine, called Revolutionary Technology (RT), has been presented at an event in Madrid. Among those attending were Carlos Novillo, the Vice Minister of the Interior and Directorate of the Madrid Security and Emergencies Agency 112, and Christian Ebner, the Austrian ambassador to Spain.

Also present were members of different fire brigades from different autonomous communities, as well as representatives of AENA, the Army, members of the UME, and AIRBUS.

This new Revolutionary Technology (RT) combines the main demands of emergency services: safety, ergonomics, and dynamism, with an environmental commitment based on the absence of gas and noise emissions. As Rebeca Blazquez explained, “In addition to its benefits with the environment, it will facilitate the work of rescue teams, reducing stress, and benefiting both professionals and citizens”.

Its design, level of safety while driving, and its manoeuvreability, make it the most modern emergency vehicle in the world. The RT was been designed from scratch by the Rosenbauer group. As a result, it is a revolutionary model in terms of the architecture of a fire-fighting vehicle.

Rebeca Blazquez pointed out, the vehicle is designed, “allowing, for example, a cabin that becomes a command meeting room, with a very low centre of gravity, and a more balanced distribution of weights between the axles, thus achieving more stability, and reducing the risk of accidents”.

Rosenbauer placed a special emphasis on reducing emissions when designing the vehicle. In fact, the movement, the pumping operation, and the actuation of the extinguishing or rescue tools can be carried out electrically, feeding directly from the batteries. In addition, during the presentation, it was explained that the RT can be charged with both alternating or direct current, depending on the infrastructure available, without having to use a specific device and using a standard industrial outlet.

It should be noted that the volumes of the vehicle’s water tanks range between 1,000 and 4,000 litres, while those of the foam tanks are between 50 and 400 litres.

The vehicle will also be presented in Barcelona, ​​as part of a tour that Rosenbauer is making in Spain. After Spain, they plan to visit other European destinations including France, Germany, and the United Kingdom, as reported by laopiniondemalaga.es.