Greta Thunberg mobbed as she arrives in Glasgow 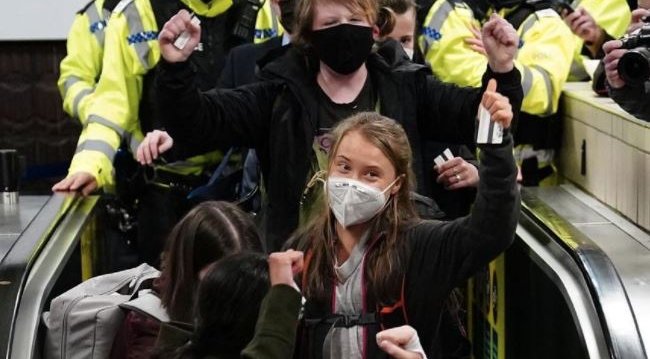 Greta Thunberg mobbed as she arrives in Glasgow ahead of the COP26 climate summit.

Greta was seen giving cameras a thumbs up on Saturday as she headed through Glasgow Central Station. She had made the journey from London to Glasgow by train.

Leaders from across the globe are getting ready to discuss climate change at the COP26 summit. Greta has revealed that officials have not “officially” invited her to the summit.

Speaking to BBC’s Andrew Marr, Greta commented on whether she had been invited to the summit. She said: “I don’t know. It’s very unclear. Not officially,”

“I think that many people might be scared that if they invite too many radical young people, then that might make them look bad.”

As she arrived in Glasgow, Greta was surrounded by police. She was also swamped by environmental activists as she left the train station. She seems pleased to be in the UK though.

More than 100 officials from across the world will take part in the climate summit.

Greta has recently called the British government “climate villains”. She has claimed that the UK along with other countries uses “creative carbon accounting.” She believes that not all emissions are counted correctly.

Speaking to Sky News Greta said: “I find it very strange that they’re like, they are the ones who we’re supposed to look up to now, but they are objectively one of the biggest climate villains, which I find very strange,”

A spokesperson for the UK government commented: “Given the UK has cut emissions faster than any other major economy over the past three decades, and that we are the first country to legislate to reach net zero by 2050, we stand by our assertion that we are leading the way in the fight against climate change.”