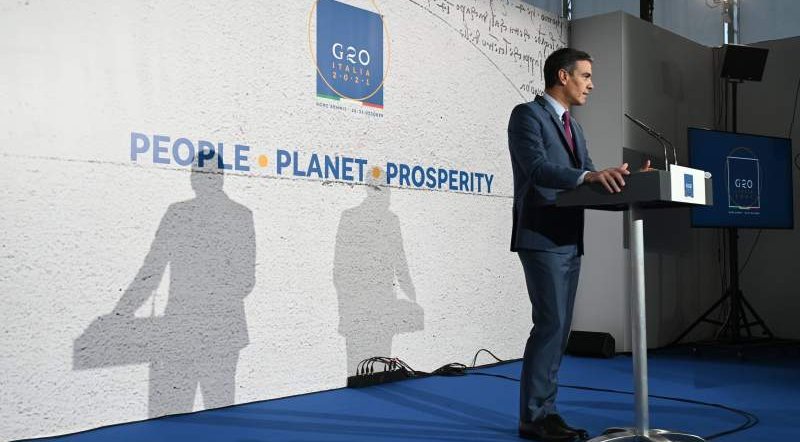 This gesture as a recognition of Spain’s leadership in the field of climate change was made during the first segment of the COP26 summit, which was dedicated to the presentations of national leaders.

He reflected on the approval of a Climate Change and Energy Transition Law; the decision to allocate almost 30,000 million Euros of the Recovery Plan to the ecological transition and of the organization that Spain made of the COP25 in Madrid, after the resignation of Chile, at a very difficult time in the fight against the climate alarm.

Pedro Sánchez recalled that, since that last Conference held in the capital of Spain, in 2019, “the certainty about the catastrophic risks” of the climate emergency is increasing. “The snowstorms in Spain, the forest fires in Greece, Australia and California, hurricane ‘Ida’ in the United States and the floods in Germany and China are proof of the ‘code red’ certified by scientists in which the world find itself.”

Faced with this scientific evidence, the President of the Government has called for “greater ambition” in the objectives of the fight against climate change and “to support” those objectives with economic resources, so that society perceives the ecological transition “not as a threat, but as a great engine of inclusive economic growth “. It is now that the summit members of COP26 must make achievable promises to make impacting changes before is to late.

Meeting the goal of annually financing the poorest countries with 100 billion dollars so that they too can join the energy transition is one of the “litmus tests of COP26” when it comes to “restoring trust between countries from the north and from the south. Spain will do it’s part ,” assured Pedro Sànchez.

Consistent with this objective, Sánchez has announced that Spain climate funding will increase, with a rise of 50% of the current commitment by 2025. “Our goal is to reach 1.3bn Euros per year from 2025” in economic aid to less developed countries, so that they can face a sustainable and fair energy transition, said the President.