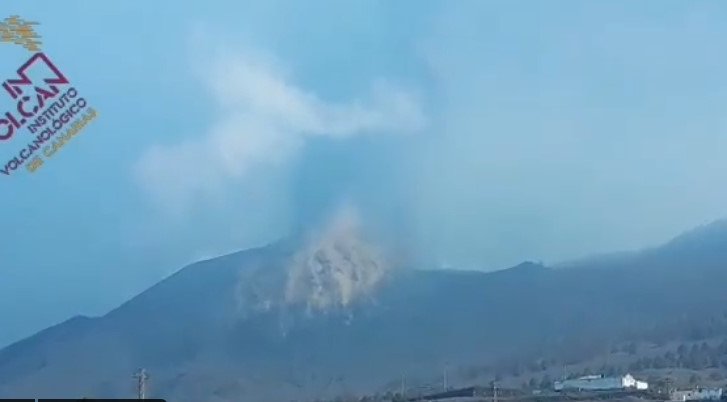 Carmen Lopez, the national director of Volcanic Surveillance of the National Geographic Institute (IGN), and spokesperson for the Pevolca Scientific Committee has given her press conference today, Tuesday, November 2. Ms Lopez explained that the Cumbre Vieja volcano is still emitting a considerable volume of ash and lava, as it has done now for the three previous days.

The entire west and northeast sector of the island of La Palma is covered with ash deposits, a phenomenon that has been accompanied by short episodes of audible bursts that Ms Lopez stressed could be caused by intense degassing.

She also pointed out that in the last hours the high rate of lava emission from the volcano continues on the northwest flank of the main cone. In what is now classed as the pouring zone 11 there has been a slight advance of the lava flow moving towards the west, approaching the LP-211 highway.

Ash and sulphur dioxide are currently being expelled in an east-southeast direction. This presents an unfavourable scenario for the next 36 hours for the operation of La Palma airport, and its airspace. Tomorrow, Wednesday 3, there is a probability of weak rains in the northwest of La Palma, which may be locally moderate during Thursday.

Seismicity continues to be located in the same areas and at the same depths of between 10 and 15km and some deeper than 20 km. The maximum magnitude in the last 24 hours has been a 4.6 mbLg earthquake that occurred yesterday at 8:24pm, at a depth of 36km, and felt slightly in La Gomera, and Tenerife, as reported by levante-emv.com.