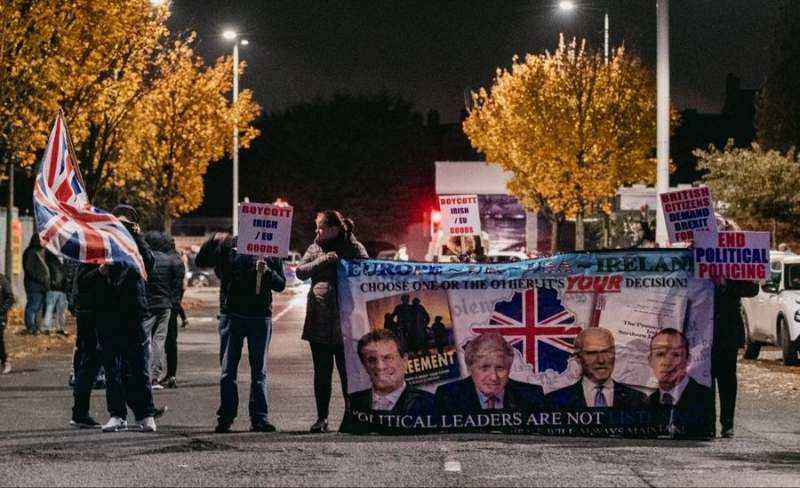 Tension in Northern Ireland is high because of Loyalist discontent about Brexit protocol placing a trade border in the Irish sea.

Politicians, however, have also blamed unemployment and poverty for the growing anger.

Police officers were sent to the Loyalist and Nationalist areas last night as they tried to stop the violence.

A PSNI spokesman said the violence broke out during a small protest on Lanark Way, with disorder continuing for several hours, missiles were thrown at police officers and vehicles and items were burnt.

Some clashes with police on Lanark Way again tonight pic.twitter.com/jz5v57ZsgU

The spokesman said: “A number of police vehicles were damaged by masonry attacks. Calm was restored to the area by around 10:30pm.”

“The disgraceful scenes of disorder seen this evening put members of the public and the responding police officers in real danger and must be condemned by all.”

“The totally unacceptable behaviour by those intent on trouble caused significant inconvenience to the local community and only served to heighten community tensions across the area.”

“I would like to thank local community representatives and youth workers for their influence and assistance in preventing further disorder.”

“I would appeal for those involved in disorder to consider the choices they make in coming out onto the streets to attack police, property and their own communities.”

Sinn Fein assembly member Pat Sheehan said: “There is absolutely no place in our society for this needless violence and local residents deserve to live in peace.”

“Tonight’s trouble is a direct consequence of the dangerous and irresponsible stunt organised by loyalists at the Lanark Way interface this evening.”

“This so-called anti-Protocol protest was deliberately organised at this interface with the sole intention of heightening tensions and causing trouble.”

“I am calling on political unionism to show some leadership and call for an immediate end to all protests at interface areas before someone is seriously injured and they should tone down the provocative and dishonest rhetoric.”

SDLP West Belfast representative Paul Doherty called for a permanent end to disorder between both sides: “The scenes in west Belfast this evening have been highly regrettable.”

“I went to the area to appeal to our young people not to engage in anti-social and dangerous behaviour that does nothing but cause misery to the long-suffering people of this community and put their own future at risk.”

“There can be no excuse for attacking police officers who are doing their best to keep the community safe. The young people taking part in these incidents are likely to end up with a criminal record or worse and I would urge them to think twice before they act.”

“The violence on the streets of west Belfast this evening has little to do with Brexit. It’s about communities that have been abandoned and led astray by their politicians.”

“Our young people are frustrated because of the high levels of poverty, unemployment and educational underachievement in these areas and this is what we need to be focusing on tackling.”